Spray is a derogatory term for a monologue wherein an individual describes his or her climbing in an arrogant, narcissistic and self-promoting manner. Those who engage in spray are usually trying to elevate themselves and their egos above whomever they are talking to. In other words, spray isn't just bragging, it's a form of put-down. The subtext to spray is that, "I'm so good, you could never dream to be as good as me..."

In a discussion of spray on rockclimbing.com, a poster named Tradguy provided a great definition and example of spray:

I guess I've always thought of spray as being given without having been asked for. Like if someone asked you what you climbed today, it would be expected that you name routes and grades and such. However, if you just walk up to someone and start talking smack, or throw out unneeded comparisons or references to other climbs or people, then it becomes spray. For example, I'm in Joshua Tree with a couple friends, one of whom is just starting to lead up a 5.8. Some random guy wanders up and starts chatting. Allow me to paraphrase:


This guy continued to spray like a firehose until we finished our climb and left. Kind of pathetic, really.

I had a similar encounter a few years ago. We were climbing at The Gallery in Red Rock Canyon when a guy approached a group adjacent to us. The guy was simply looking for a little bit of information, but the sport climber he approached was far more interested in derogatory spray. The guy asked a simple question, "hey man, is this a good route?" 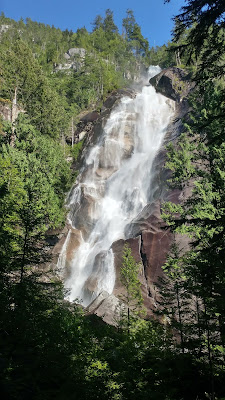 In three short sentences, this expert sprayer had not only proclaimed his skill, but completely and maliciously put down the person who asked him a question. Years later, I still jokingly imitate the man's spray...which is easy to do when it was so pronounced and vicious.

Indeed, both examples here are pronounced examples of spray. It isn't the pronounced spray that people have to be careful of. Instead, it's the subtle spray. It's the mild bragging that we all do when we finish a climb that we think is cool. A little mild bragging -- or storytelling -- can be fun and engaging for everybody involved. One just has to watch the line and be careful not to step over it into spray. The line should be clear...it's the point where you are no longer telling stories and sharing adventures, it's the point where it becomes a monologue where nobody else gets to share and you start to talk about how good you are and how many celebratory climbers you climb with...