Paying Attention to Navigation in the Mountains

It was 1997 and I was on a backpacking trip with the woman who would one day become my wife. We set-up camp in the fog and then went to explore. We weren't on a glacier, we were just above tree-line on the Pacific Crest trail, and we couldn't see anything.

We wandered around a little bit, just enough to get disoriented in the fog. There were lots of hints as to how we could have gone back to camp, but I wasn't paying attention. Instead it was my significant other who navigated us back. She had been watching land marks and paying attention.

The mountains are tricky. And not paying attention is an easy way to get hurt, lost, or even killed.  Obviously, you need to pay attention everywhere in the mountains, but here are a few thoughts about places where particular care needs to be taken. 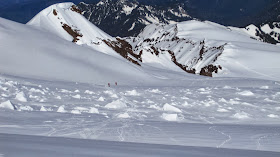 The preceding photo is of a debris field below Colfax Peak on Mt. Baker. The humps in the snow are ice blocks which sheered off an ice cliff above the glacier. The boot pack goes right through the center of this field.  There are two things which bother me about this particular objective hazard area.

The first is that it's easy to go around the icefall zone. But it's shorter to go through it. The result is that no matter how many guides try to move the boot-pack to the outside of the debris field, people continue to go right through it.

The second is that climbers often don't look at where the debris came from, and they just sit down on the ice blocks to take a break or have a snack. There are icefalls all over the place that you have to go through. The danger is mitigated by moving fast, not by having lunch. 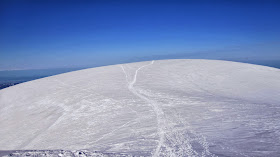 This second photo is also on Mount Baker on the summit plateau. You'll note that there are two boot-packs. One of these leads down the Coleman-Deming Route and the other leads down the Easton. It's incredibly common for people to get to the summit, turn around and to start walking down the wrong side of the mountain.  And this happens on crystal clear days... Imagine what happens when there's a whiteout.

Once again, this is a very simple thing. Pay attention to where you came from and it will be much easier to get back.

Baseline navigation in the mountains is simple. Look around. Take in your surroundings. Make sure there's no objective hazard above you. Make sure you know where you came from. All of this will help you to have a successful day in the mountains.