Sound familiar? Many parties establish an anchor and then have communication problems.  Some feel that the best way to deal with this is to employ the use of radio, whereas others use rope tugging tricks to communicate.

I'm not a fan of the use of radios, in part because people become used to them almost too quickly. When people depend on radios, they lose touch with even the most basic command sets. And when something goes wrong with the communication, it becomes incredibly hard to reestablish effective communication.

Rope tugs are fine, but they should be used sparingly.

It's common for climbers to miss one major factor in communication. That factor is the position of the belayer.  Many climbers climb up to a large belay ledge, walk across the ledge, build an anchor and then clip into it.  The fact that they are away from the edge and cannot see their partner compounds all of the communication issues. The best thing that one could do in order to decrease these issues is to extend their anchor to the edge.

There are three systems that you might employ to extend the anchor. They are as follows:

There are two issues with this system. First, it's easy to estimate incorrectly, which means that you have to walk back up to the anchor and readjust your clove-hitch. And second, your autoblocking device is out of reach, which makes it hard to provide slack or lower a climber.

The advantage to this system is that it is really really quick.

The same problems exist for this system as for the previous system. You are unable to reach the belay device in order to provide slack or lower the climber.

This last system is really smooth. When you reach the anchor, clip into it with a munter hitch, then belay yourself back to your desired position. Once you are in position tie a BHK. This will lock you into place, but will also give you a powerpoint to work with. You can then belay off that powerpoint and when your partner gets up to you, you'll be able to use the munter hitch in the anchor to belay both you and your climber up to the anchor. 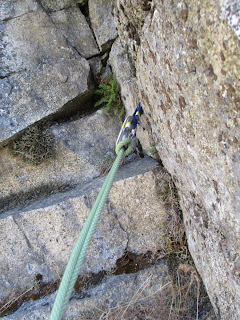 In this photo, a climber clipped into an "anchor" to lower himself to the edge.  And before all of you jump down my throat, yes, it is a single cam.  I was trying to teach this quickly when I took these photos. So let's pretend it's a SRENE 12 point anchor. 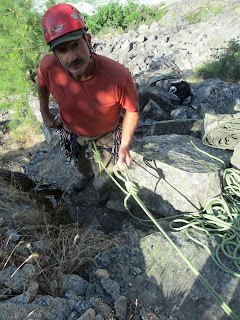 The climber makes his way to his stance and ties a BHK, thus securing himself and creating a powerpoint. 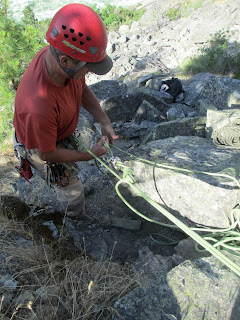 He places his autoblocking device on the new powerpoint and belays. 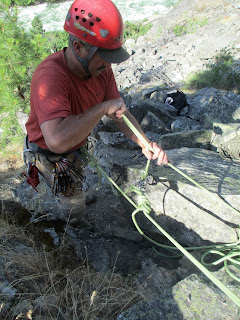 Once his climber gets to him, he can tie a catastrophe knot behind his autoblocking device. 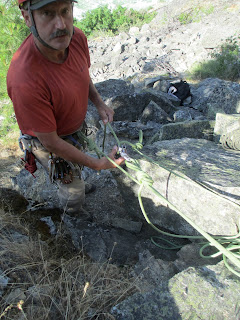 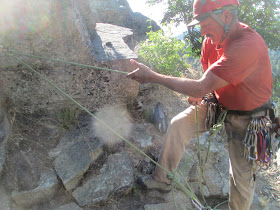 He belays both himself and his climber up to the anchor. 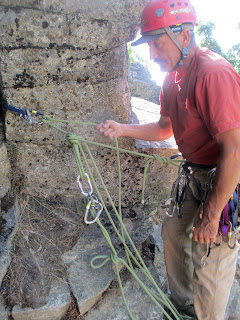 Once at the anchor, both climber and belayer can tie-in.