Mountain is an awesome film...! It opens with a tremendous quote. "Those who dance are considered insane...by those who cannot hear the music..."

That sums up our lives as climbers. But people still ask, "why do you climb?" Mountain does its part in answering that question. The movie explores mountains and mountain sports all over the world. The film features spectacular scenery and heart-stopping exposure. With little more than images, music and some narration by Willam Defoe, we see people climbing, mountaineering, skiing, base jumping and mountain biking in some of the most wild terrain imaginable. And it is beautiful. It explains why we climb without ever explaining why we climb... 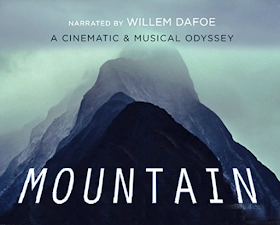 There is no doubt that this is a film built from other films. There is footage from several years of Banff Film Festival World Tours and Reel Rock Film tours. But it is some of the most fantastic footage out there. We get to revisit some of the best scenes from films like Cold, Sketchy Andy, Ice Revolution, Alone on the Wall, The Swiss Machine, Honnold 3.0, Meru, A Line Across the Sky, and many many others.

One might argue that there is too much recycled footage in this film. And perhaps there is, for someone who sees a lot of mountain documentaries. But this footage has been completely repackaged. The film -- unlike those others -- was not made for a mountain audience. Instead, it was made for general consumption and was designed to be a visual feast.

Mountain doesn't do anything like other mountain films. It does not provide non-stop narration and interviews with climbers and skiers. Instead, it just provides us with non-stop beauty and action. It tries to be something different, and by that measure it succeeds.


Another piece of criticism of the film is that it doesn't have a story.

And to be honest, it doesn't.

But that's okay. The film was designed to be not only inspirational, but to be a compendium to a classical music concert performed by the Australian Chamber Orchestra. And it works... We are transported to the highest places on the planet while we float on every note.

The combination of films that provided the source material for this documentary have one thing in common: a climber named, Renan Ozturk. Renan is not a Hollywood guy by any means. He is a climber who, over the years, has built a reputation as a master cinematographer. Indeed, Renan gets the cinematography credit for the film.

We have all seen Renan's work -- in many cases, without realizing it -- and it's clear that he has an exceptional eye. Renan understands the power of mountain imagery. And he understands how to capture it and bring it to the masses in a way that allows us to feel like we are there with him.


And though Renan provided much of the footage, he wasn't the master mind behind the project. Instead it was the Australian Chamber Orchestra that commissioned Jennifer Preedom, who previously directed the acclaimed film Sherpa, to develop the documentary. As such, this was a very different type of process. Preedhom wasn't the only "director." The film was certainly overseen by her, but it was also put together by a combination of musicians and editors in order to create the right feel...

Mountain is a beautiful film and well-worth one's time, especially if you can see it on the biggest screen possible.