Climbing and Outdoor News from Here and Abroad - August 2, 2018

--Speed climber Scott Bennett recently visited the Pacific Northwest and ripped up both the Complete North Ridge of Mt. Stuart (5.9, V) as well as the West Ridge of Forbidden Peak. He made speed records on both ascents, respectively 5 hours and 57 minutes and 4 hours and 54 minutes car-to-car. To read more, click here. To see a video of his Stuart ascent, click below:

--A solo climber was rescued this week after he got his foot stuck between two granite slabs on Mt. Conness. One of the boulders was reported to be as big as 2.5 tons! To read more, click here.

--So when is it okay to call someone out who is misrepresenting him or herself on social media? When is it bullying? Should you even care? Apparently an individual posted fake pictures of himself free soloing on Crystal Crag on Instagram. He was called out on Mountainproject and then things got heated. The post was removed because people became abusive. There's a new thread discussing this, here.

--There were two rescues in Zion National Park this week, including one that took place after a group leader mocked a ranger's recommendations. To read more, click here.

--The Inertia is reporting that, "Vail Resorts is receiving serious blowback from viewers after refusing to refund the pass payment of Michael Cookson, an Arvada, Colorado resident who was diagnosed with prostate cancer which then metastasized into bone cancer. He’s currently undergoing treatments and won’t have the strength to ski this season, he fears." To read more, click here.

--Outdoor industry events are drenched in alcohol. So it was nice that this year at the Outdoor Retailer show there was an event that promoted sobriety. To read more, click here.

--A climber was killed in a fall from Mt. Yaminuska near Canmore, Alberta this week. Information on the accident is scarce. To read more, click here.

--Jackson Hole News and Guide is reporting that an improperly threaded ATC was likely to blame for a climber's death last week at Storm Point. It's important to note that an autoblock backup would likely stop a mistake like this from being fatal. To read more, click here.

--Do outdoor brands use Native American imagery in a way that is disrespectful? There's certainly a case for that. To read more, click here.

--Outside had an awesome article this week on guides and athletes and the additional pressure of being a mom. To read more, click here.

--CNN is reporting that, "Italian police have identified the remains of a French skier more than half a century after he was lost in the Alps, thanks to social media. In 2005, police in Italy's Aosta region found human remains and ski equipment 3,000 meters (10,000 ft) up in the mountains near the Swiss-Italian border. They thought the man died during a ski descent, but were unable to identify the body at the time." To read more, click here. 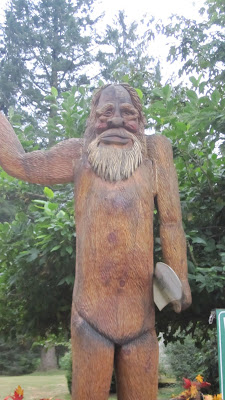 Non-Pornographic Bigfoot Chainsaw Art in Greenwater, Washington.
Apparently, there are artistic renderings that might be deemed pornographic...

--So we often post things about Bigfoot in a tongue-in-cheek way. But this one was a bit too much. The New York Times and others are reporting that Denver Riggleman, a Republican candidate for Congress in Virginia, is involved in Bigfoot erotica. Yeah... So here's an article about it.
Jason Martin at 6:00 AM