Johannesberg Mountain is massive. It is one big mountain and it literally towers above the popular Cascade Pass trailhead.

The Northeast Buttress is the longest line on the mountain on one of the biggest walls in the range. There is a long history of people suffering epics on this route, and it is not uncommon for people to return one to two days late from an ascent of the mountain.

This reputation has always scared me a bit. I've spent a lot of time looking at the mountain from Boston Basin and I've always thought, I should try that. But then figured it was a dumb idea, that the wall was too big, too bushy and too demanding.

But with the help of the internet, some of my fears dissipated. Steph Abegg has an awesome website devoted to climbing in the Cascades and everywhere else. Her excellent description gave us just enough to commit. 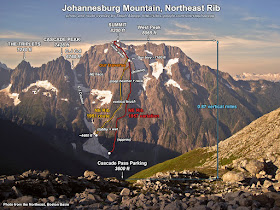 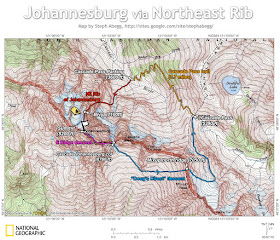 
The route can be split into several sections:

Climb up to the base of the slabs on steep snow. Climb up onto the slabs and work your way up to a place where you can cross the waterfalls.

These slabs look benign from below and they aren't really any harder than 5.5, but they are loose and there is very little protection. Knife-blade pitons can provide some extra security. 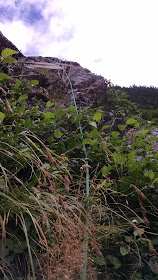 A typical lead low on the mountain.

After the slabs, the goal is essentially to climb up and right toward the ridge. This sounds reasonable at first, but then you realize that to do this, you will have to make your way through a literal wall of brush. Climb up vertical and semi-vertical brush and trend right. You'll be doing a lot of tree climbing on this trip.

If you brought an ice axe or a picket or anything else, be sure to put them inside your pack. The trees will try to take them away. Rest assured, anything and everything on the outside of your pack will get caught on branches.

Eventually you will break out of the trees on the buttress proper. The character of the route changes here. Now you will be working your way up steep heather slopes on the ridge. If you elect to simul-climb there will be marginal protection every 200-feet or so.

You may wish to use your ice axe and crampons in the heather to increase your security. 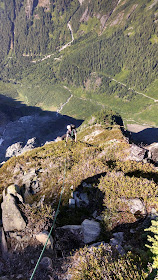 AAI Guide Will Gordon on the Buttress in the Heather

Eventually the heather begins to fade into rock. You'll reach a sharp ridge followed by a headwall.

Some parties elect to rappel down into the gully climber's right of the ridge. Apparently there is a piton rap station somewhere. From there they climb forty-degree snow. We elected to traverse to the left to a short chimney that was mostly 5.5, with a couple of 5.8 moves right off the deck.

Following the chimney follow moderate rock up to a bivy site at 7,100-feet, at the base of the glacier.

For most parties it will take 8-12 hours from the base of the buttress to the bivy site. If summer, there will likely be running water at the site. 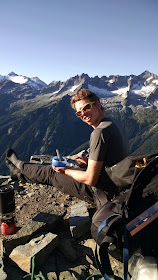 AAI Guide Will Gordon at the Bivy
with the Torment-Forbidden Traverse in the background.

Following the bivy, climb up onto the glacier. Follow the steep snow arete up onto the broader glacier. The arete drops off steeply on both sides. Be prepared to take appropriate precautions here. 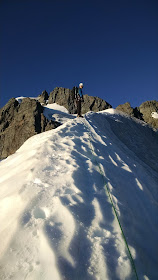 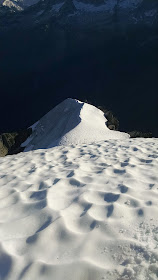 Looking back down at the snow arete from above.

Continue up the glacier, trending toward the final steep headwall. There are reports online that the final headwall can be quite steep and icy. In July of 2015 we found it to be a single 200-foot ice pitch. Three ice screws were adequate to protect it and we didn't feel the need for a second tool. 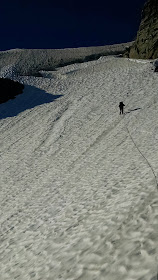 Trending toward the ice pitch. The ice pitch can be seen up in the left-hand corner of the picture.

It should be noted that there are many low-angle and flat spots on the glacier that could be carved out for a higher bivy than the one found on the rocks below the glacier. However, due to sun cupping in the summer, you may have to do some work to create a platform.

Once on top of the ice pitch, there will be two notches in front of you. Climb up to the notch on the right and drop over to the west side. Scramble to a small notch and then up to the summit. 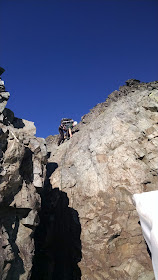 AAI Guide Will Gordon climbing up and through the right-hand notch
near the summit.

You may leave your packs at the snow if you want to move quickly. The summit is only a few minutes away.

It should take between 1 and 3 hours for most parties to get to the summit.

Many of the descriptions on the internet do not give credit to the sketchiness of this descent. They often say things like, you can rappel or descend a loose third and fourth class gully. This is all true, but there is significant traversing along the southwest side (right) side of the ridge before you reach the gully and rappels.

At this point you will be looking down a sketchy gully. Note that on the left-hand side of the gully, approximately 200-feet down there will be a little tower. In 2015 there was a carin on this tower next to the first rap anchors.

Scramble down to the rap anchors and make one rope stretcher rap or two shorter rappels to a big block. Make two or three more rappels down until you are in the heather once more. Climb down through heather to another slightly hidden rap station and then make two more rappels down to the CJ Col. This could require up to seven rappels.

Many of the rappels are around large blocks. Be sure to bring lots of cord to backup sketchy anchors. And double check the boulders that are wrapped, some of them are suspect.

In theory, one could descend the loose gully instead of rappelling, but that looks sketchy.

It will take 3-5 hours for most parties to negotiate the ridge descent.

There are three ways that you could get back to the Cascade Pass parking lot. The first is to descend the CJ Col, which would be super sketchy. The second is to traverse below the Cascade Peak, the Triplets and Mixup Peak to join the Ptarmigan Traverse Trail and to drop over Cache Col. And the third, and perhaps quickest way is to use Doug's Direct.

To use the Doug's Direct Route, traverse under the south faces of Cascade Peak and the Triplets and then ascend up the North Ridge of Mixup Peak. The crossover is not obvious, and it's not a bad idea to have a waypoint or the awesome picture that Steph Abegg took below. 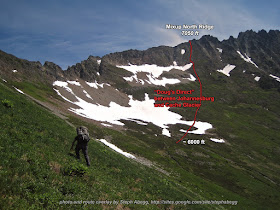 The other side of Mixup is composed of slightly better 3rd and 4th class rock, that steps down. Drop down on the steps and contour right into steep heather and 3rd class terrain. Be careful here as a fall would be deadly.

Eventually you will find a heather filled gully that will drop you down onto the Cache Glacier.

Personally, I found the steep heather to be a bit much when dehydrated on day two of the climb and would probably opt for the Cache Col option if I were to do the route again.

It will take most parties 4-6 hours to complete the Doug's Direct descent and make their way back to the parking lot.

People go a lot of different ways on this mountain. Amazingly, trip reports vary from people finding literally vertical ice at the top, to people finding a way to avoid roping up for most of the ascent. If these notes don't make sense to you, follow your nose... You'll get there.

It took AAI Guide Will Gordon and I, the following to get to each area:

--Base to Bivy - 9 hours, 15 minutes - we took one 15 minute break, but spent a lot of time in the brush. Upon later reflection it's likely that we weren't on the best line. It took Steph Abbeg about 8 hours. It was also 90-degrees on the day we climbed and we ran out of water. This slowed us down a bit.

--Bivy to Summit - 2 hours, 30 minutes - Others report two hours, some report more. We had one ice pitch and a little poking around to find the actual summit. If you have to climb an overhung bergshrund, this could be a lot longer.

--Summit to Base of East Ridge - 5 hours - Another complex area. This would be a lot faster with better beta. Hopefully, I've given that to you above.

--Base of Ridge to Car via Doug's Direct - 6 hours - This was at least two hours longer than it needed to be. We were definitely slow due to dehydration again and it was ninety degrees out again. But we spent some time trying to figure out where Doug's Direct was...

In the summit register it shows a well known sponsored climber's name who has since passed away as being 11-hours, car to summit. Our total time was 11:45 car-to-summit. So this seemed good. However, AAI guide and super-athlete Chad Cochran and AAI Guide Mike Pond, did the route car-to-car in 11-hours...!