Mountain rescue is a tough job.

People are lost. People are injured. People are dead. And the rescuers have to go out and try to deal with the situation in every condition imaginable. It is an incredibly difficult job. And in the United States most of the people involved in mountain rescue are volunteers. 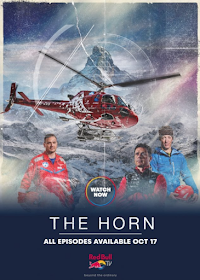 In the Alps of Europe, things are different. People still get lost, people still get injured, and people still die, but those involved in mountain rescue are professionals. They have state of the art training, high-end helicopters and advanced rescue equipment. They are truly some of the best mountain rescuers in the world. And they have to be, because at the height of their season, a rescue team might see 20 calls in a day. It's no different than being a paramedic at a fire station in a small city!

This is where The Horn -- an awesome documentary series on Netflix -- starts, at a the home base of Air Zermatt, a high-end helicopter equipped mountain rescue unit.

Air Zermatt is composed of pilots, doctors, mountain rescue specialists, paramedics, helicopter technicians and mountain guides. They are based at the foot of the Matterhorn in the mountain village of Zermatt, a place where thousands of people every year, climb, ski, base jump and get hurt in the mountains.

The team fluctuates between high-end, high-risk mountain rescues and ski accidents. But regardless of how a person got hurt, or the terrain their in, the team operates like a Swiss clock, perfectly in tandem with one another. It is incredibly cool to see a mountain rescue operation like this.

The Horn is produced by Red Bull TV, an online television platform. The movement of this series from Red Bull's high octane streaming website to Netflix is another demonstration of how outdoor adventure sports are slowly making their way into our national consciousness. It also brings forward the issues of risk that surround adventure sports. These issues can lead to some hard questions from the outside of the adventure sport world.

Whenever there is an accident in the mountains, people ask, "who's paying for this?" They ask, "who's paying for the rescues?" Their concern is that taxpayers are footing the bill for adventure sports. The downside to a series like this is that it does show flashy helicopters run by a private company that provides rescue services in the Alps. I can imagine the uninformed believing that this series is also reflective of how things operate in the United States.

The Alps and rescue services there are completely different. As noted above, in the United States, rescues are primarily facilitated by volunteers. There are professional rescuers in the Untied States, and depending on the organization, some tax dollars may go to them. But even then, the bulk of the hours spent in rescues are still done by volunteers.

Regardless of the politics around rescue, one thing is clear. The Horn is a beautifully produced television series. The views of the mountains around Zermatt are incredible. The stories of the rescuers are incredibly engaging. And the tension around some of the things that the Air Zermatt team has to deal with is palpable. This is an incredible show, and well worth the time!