The ability to understand mechanical advantage is an essential part of technical rope rescue, crevasse rescue and climbing self-rescue.

The best way to begin an understanding of mechanical advantage is to understand how a toprope works. If a 150lb person is on one side of a rope, then a belayer has to provide at least 150lbs of force to keep the person from lowering to the ground.

In this image, the rope remains a unit of one all the way through to where the green prusik is
attached. At the pulley with the prusik, there is a 2:1 mechanical advantage.
The two in the traveling pulley are added to the one that follows the rope.
This is a 3:1 simple system, commonly called a z-pulley system.

In this image, a 3:1 has been laid on top of a 2:1, creating a 6:1 compound system.
The haul line places a unit of two on the upper traveling pulley. The line then runs through
to the prussik, adding an additional unit. So the system is 3:1 at the green prusik. The 3:1
is mirrored on the opposite side of the lower traveling pulley, creating a 6:1.

It's important to note that the idea behind mechanical advantage is that pulleys and changes in direction theoretically decrease the amount of force required to haul a load. However, friction from rock or snow can increase the load. 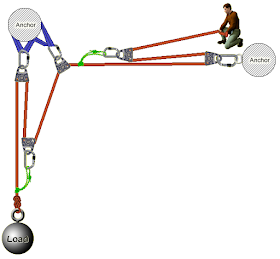 Understanding mechanical advantage is an important part of rescue. It is possible to memorize what certain systems look like, but there is great value in being able to count out a system...

Don't scroll down any lower until you want to see the answers!