--A 42-year-old man died in a tree-well on Saturday at Mt. Hood. To read more, click here.

--Last week an article made the rounds about the glory of being a ski instructor in Aspen. This week, things got a little more real, and an outside writer posted a piece about being an instructor at Mt. Baker Ski Area. Check it out, here.

--Gripped is reporting that, "Paul McSorley and Joshua Lavigne have climbed an esthetic new mixed route in the North Walls on The Chief in Squamish. The 250-metre M5 mixed route climbs a long treed ramp to the base of two steep pitches of ice that have formed in the recent cold coastal weather." To read more, click here.

--Yosemite National Park is reporting that, "At approximately 12:30 p.m. on Sunday February 24, 2019, a park visitor was killed in an incident on the Mist Trail in Yosemite National Park. Xuan Wang, 56, from Cupertino, California was hiking on the trail when she was struck by falling rock and ice and she succumbed to her injuries soon thereafter." To read more, click here. 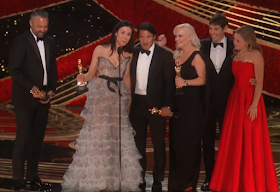 The team behind Free Solo accepting their awards at the Oscars.

--Free Solo won the academy award for Best Documentary. This is a huge deal for the climbing community because it's the first time a climbing film has been accepted at such a level by the mainstream audience. To read more, click here. Also, Alex Honnold wore a custom tuxedo made out of stretchy North Face fabric...

--Here's an interesting piece on the Taos Ski Resort in New Mexico, it's history and culture.

--Here is an update on a February 16th avalanche that killed two men near Crested Butte.

--The American Institute for Avalanche Research and Education (AIARE) is looking for a new Executive Director. To read more, click here.

--The Billings Gazette is reporting that, "One man is dead after being caught in an avalanche while skiing on the west side of the Bridger Mountain Range Tuesday, according to a press release." To read more, click here.

--A 9-year-old boy died after he struck a tree at Big Sky Ski Resort in Montana. To read more, click here.

--A climber was injured on Sunday near Santa Barbara on the Cold Spring Trail. To read more, click here.

--Maureen Beck, a one-armed climber and the star of the Reel Rock film, Stumped, was just named one of National Geographic's Adventurer's of the Year. To read more, click here.

--The Access Fund is reporting that, "Access Fund is thrilled to announce that it has secured critical protections for Wilderness climbing within the landmark Natural Resource Management Act that just passed Congress. Access Fund also celebrates the role of climbers in getting this historic, bipartisan public lands package through Congress. With the passing of the Natural Resources Management Act, Wilderness climbing protections are poised to be written into law for the first time, creating a legal precedent that will make it easier for Access Fund and its local affiliates to protect Wilderness climbing activities across the country. The bill now sits on the President’s desk, and he has indicated that he plans to sign this bipartisan bill it into law." To read more, click here.

--The Access Fund is reporting that, "on December 28th, the Department of Interior (DOI) proposed new regulations under the Freedom of Information Act (FOIA) that would make it much harder for Americans to get basic information from the government—and Access Fund and our partners at Outdoor Alliance are pushing back. The DOI oversees the National Park Service and Bureau of Land Management, which oversee many of our most iconic climbing destinations. As a government agency, DOI must comply with FOIA, the critical law that allows the public to investigate and understand our federal government’s actions and decisions. Access Fund uses FOIA to request records from land management agencies in order to evaluate decisions that affect our public climbing areas and develop well-informed advocacy strategies. FOIA is vital to the functioning of a democratic society and critical to Access Fund’s work to protect public lands." To read more, click here.

--Currently the Olympic climbing event will be a combined event with bouldering, lead climbing and speed climbing all mixed together. The goal is to separate these things for the 2024 Olympics. And it just might happen. To read more, click here.