Our culture has evolved to a point where we are very accommodating to people with disabilities. There are special parking areas for people who have trouble walking or are in wheelchairs. Computer systems help the deaf to speak on the phone. And many crosswalk signals use a series of clicks and vocal announcements to help the blind determine when to cross the street.  And indeed, these are just a few examples of many hundreds of things that we do in a first world culture to accomodate the disabled.

In the developing world things are very different. People who have lost limbs, who can't walk or who can't see, must often resort to begging on the street. In Tibet, the problems that come with a disability like blindness are compounded by the fact that many Buddhists believe that the reason that a person is blind is because they have done something terrible in a previous life. The result is that blind people are often treated like pariahs, or half-humans... 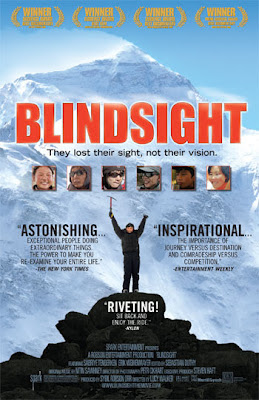 In 2004, acclaimed climber, Erik Weihenmayer was asked to lead an expedition of blind Tibetan youth up a 23,000-foot peak adjacent to Mount Everest. Why? Because Weihenmayer was the first blind man to summit the tallest mountain in the world.

Sabriye Tenberken, a blind German woman, runs the only school for the blind in Lhasa. It was at her school, Braille without Boarders, that she learned of Weihenmayer's successful ascent of Mount Everest. The mountaineer became an instant hero to the children of the school. Tenberken wrote a letter to the man, that started with the following lines:

After you reached the top of the world our Tibetan neighbor rushed into our center and told the kids about your success. Some of them first didn't believe it, but then there was a mutual understanding: if you could climb to the top of the world, we also can overcome our boarders and show to the world that the blind can equally participate in society and are able to accomplish great things.


She finished her letter with the question, "I wanted to ask if you would like to come to Tibet, maybe even to do a small climbing workshop with our kids."

Weihenmayer agreed and subsequently put together an expedition for the kids to climb Lhakpa-Ri, a 23,000-foot satellite peak of Mount Everest. Indeed, the trek to the base of the climb follows the same course that Everest climbers attempting the North Ridge tend to take. The Advanced Base Camp is the same as it is for Everest.

The DVD of this film that I received from Netflix was a bit unusual though. It was designed for both sighted and unsighted viewers. That may sound weird to readers of this blog. I wasn't aware that some films were designed to be "viewed" by the blind.  A narrator explains what is being shown on the screen throughout the film.  One might think that you could turn this feature off through your DVD player, but for whatever reason (likely my basic lack of technical prowess with such things) I was unable to do this.

With that in mind, I watched the film with this extra element. And I found it to be a very enlightening thing.  Of course, the film is about blind people, but by watching the film and hearing it the way a blind person might I had a different -- and very positive -- experience with the film than I might have otherwise.

Additionally, I watched the film with my four-year-old and my five-year-old. Being my kids, they're very familiar with mountain climbing films. But also being young kids, they haven't been exposed to many people with disabilities. It was very cool to watch them first come to an understanding that there are blind people out there. But then second, to also come to the conclusion that if the kids can go rock climbing, mountain climbing and skiing, then they're really no different than anyone else...