The Diamond on Longs Peak is one of the most recognized alpine walls in the world. While this wall is extremely popular as an arena for summer alpine rock, winter ascents of the Diamond are few and far between, requiring a wider breadth of climbing techniques and "acceptable" levels of comfort. Finding a partner for missions that promise to be arduous, cold, and snowy can be difficult but fortunately a longtime friend of mine enjoys such pursuits as much as I do so we waited for conditions to align for an attempt together.

We finally were gifted a window in February and had the opportunity to climb the Diamond in a single 22 hour push car to car via “D7”, the classic choice for a winter ascent. “D7” is a relatively direct line with straightforward aid and minimal traversing besides getting on and off the wall, making it the preferred line in the winter.

At approximately 3:00 am we left the Longs Peak Trailhead and made our way to the base of the east face of Longs over the course of two and a half hours, with an incredible sunrise rewarding us for an early start. It became apparent that conditions on the North Chimney were sub-optimal for fast climbing, with a mostly faceted snowpack causing us to punch through the snow to our waist. After 600-700 feet of snow and mixed climbing we arrived at the base of the Diamond proper, grateful to get a reprieve from the snow wallowing onto steep rock.

Once we began "D7" we switched our lens to a "climb by any means" style. Free any moves one can, aid everything else. Moves up to 5.9/5.10 were freed, but the minute free climbing caused a substantial slow of movement, french-freeing and direct aid was employed. As night fell, we reached the end of "D7" and found what would be the crux: exiting the Diamond on "junky" snow. While it was slow-moving, we found ourselves awe-struck with surreal views of city lights over 8,000 feet below us.

Our descent route took the shortest technical option via the North Face (also known as the Cables Route) with a few rappels and a 6 mile "zombie walk" back to the trailhead, arriving at 1:00 am the following day- grateful for an incredible trip and to be able to finally sleep. 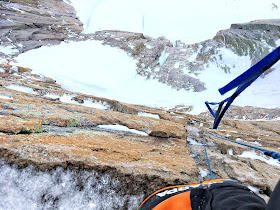 Looking down the first few pitches of D7 and the entirety of North Chimney, in the left hand corner of the photo. 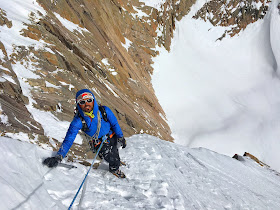 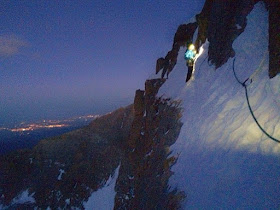 Leading the final pitch off the Diamond and onto upper Kiener's 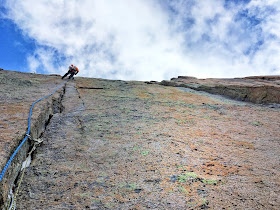