Climbing and Outdoor News from Here and Abroad - 9/8/19

--A 33-year-old Squamish resident was killed on the Angel's Crest route on the Stawamus Chief on Saturday. This is currently being reported as a fall. But there is some information on the Squamish Rock Climbers Facebook page that says that the fatality was attributed to rock fall. To read more, click here. Here is a piece from Gripped on the incident. 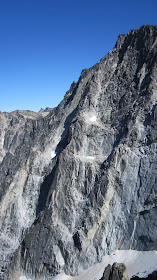 --An unroped climber was rescued off of Dragontail Peak this week. To read more, click here.

--It appears that there is a new parking closure on Mountaineers Creek Road. Following is a piece from the Leavenworth Climbing Community. Respond to them on Facebook with your thoughts. 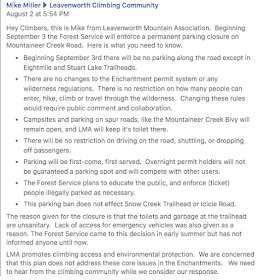 --So a woman hiking on Vancouver Island encountered a cougar, which was clearly stalking her. She yelled at it, but when that didn't work. She played Metallica on her phone. And the cougar left. Check out the story below:

--Alex Borsuk and Kaytlyn Gerbin just became the first all women's team and fifth team ever to complete Mt. Rainier's Infinity Loop. The Infinity Loop is a hyper-fitness challenge that requires a team to climb a route up Mt. Rainier, descend another route, then run back to the start on the Wonderland Trail. The team will then do this again, but run the opposite direction. It ends up being 130 miles with about 40,000-feet of elevation gain. To read more, click here.

--The Sierra Wave is reporting that, "Jennifer Crittenden will be giving a presentation titled, “Two Missing Climbers, Eighty Years Apart” on Saturday, August 10, 2019 from 1 to 3 o’clock at the Eastern California Museum in Independence, located at 155 N. Grant Street. This event is free and open to everyone. Crittenden’s presentation investigates parallels between the disappearance and subsequent searches for two mountain climbers who went missing eighty years apart." To read more, click here.

--There was a rescue in Tahquitz this week, but there is limited information.

--The BLM collected up to 225 wild horses near Red Rock Canyon over the weekend. This is due to a water emergency. Administrators didn't think the horses would be able to find enough water to survive the heat. To read more, click here.

--The Colorado Sun is reporting that, "After almost six months of courting by a suite of suitors after Arapahoe Basin’s divorce from Vail Resorts’ Epic Pass, resort boss Alan Henceroth has found a new home with Alterra Mountain Co.’s Ikon Pass." To read more, click here.

--The Vail Daily is reporting that, "Vail Mountain’s expansion up the slope on Golden Peak has taken shape, as timber removal is mostly complete on three new ski runs." To read more, click here.

--13 ABC is reporting that, "the 'grandfather of snowboarding', a name dubbed to Sherman Robert Poppen for his invention of the Snurfer died on Wednesday, July 31. The Muskegon native invented the Snurfer more than 50 years ago, before the snowboard was invented.  A Snurfer is as wide as two snow skis combined with a string attached for the rider to hold on to. His idea for it sparked because he 'always wished [he] could surf,' according to his obituary, quoting an interview with him published in Snow Magazine in 2015." To read more, click here.
Jason Martin at 6:00 AM