There are a lot of wilderness survival films out there. In most of them, you can't help but yell at the screen when someone is doing something really dumb that no one would ever do. For example, if you're stuck on a ski lift in sub-zero temperatures in Frozen, then you should probably put up your hood and put your hands in your pockets...! If the dude at the local gear shop recommends that you bring a map in Backcountry, then you probably shouldn't scoff at it...! And if your "guide" is under the age of twenty-five and says he's climbed pretty much every mountain in the United States in Devil's Pass, for the love of God, find a qualified guide before you commit to going somewhere where there have been several fatalities...

You simply don't have this kind of feeling in the film Arctic! Instead of yelling at the screen during the film, I was dragged along by a powerful performance from Mads Mikkelsen (Hannibal Lecter in NBC's Hannibal, and Galen Erso in Rogue One: A Star Wars Story) as Overgård. The character barely talks and the film is mostly about this individual fighting for his life, mostly alone, somewhere inside the Arctic Circle. 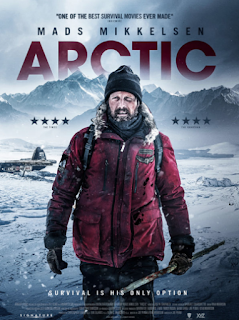 Arctic doesn't start with a dramatic plane crash. Instead, at the start of the film we meet Overgård, a man who is stranded and alone at his downed plane. He's been there for some time. His entire life revolves around a series of daily tasks (fishing, maintaining a giant SOS sign, using a hand crank to run a survival transceiver). He lives a quiet life on a barren arctic landscape, eating raw fish and living in the husk of his downed plane, while he waits for a rescue.

Finally, a rescue helicopter arrives. But in a dramatic windstorm the aircraft crashes, killing the pilot and severely injuring a twenty-something female passenger (Maria Thelma Smáradóttir). The woman is barely conscious throughout the film, and her wound becomes infected.

As the woman begins to deteriorate, Overgård must change everything. He has to act. He can no longer wait passively for a rescue. The only way the woman will survive is if he hauls her across the mountains to a base that appears to be several days away...

Arctic was the directoral debut for the musician Joe Penna. In addition to directing the film, he co-authored the tightly written script with film editor Ryan Morrison. The duo clearly work well together, as every scene of the film is tightly wound, making it mostly impossible for the viewer to step away and armchair quarterback the decisions made by the protagonist.

I say mostly because there is one sequence that might irk those with rescue training. Overgård tries to haul a sled up a slope using a hip belay. The terrain is steep, likely over fifty-degrees, capped by several overhung boulders. Inevitably the character cannot pull the sled up. He has the equipment to rig a system, but doesn't know how to use it...which is realistic too. Your average climber without rope rescue training would find this to be a difficult proposition, much less a person with no mountain skills.

In many ways Overgård's ignorance of mountain skill and his innovation at survival is exactly what makes this film worth watching. This is a movie about a normal guy in a uniquely abnormal circumstance. It's a piece about how this normal guy deals with significant adversity. And it is awesome...!

There are a lot of wilderness survival movies out there. It's a genre within itself. And when we dig deeply into these movies, we find that mostly they're not that good. But if we dig long enough, eventually -- sometimes -- we find a gem. Arctic is definitely one of those rare finds, and should be high on your list of must-see outdoor films...!