There are a lot of horror-style movies out there that involve climbing in some way. Most of them are not just bad, but are really bad. It's actually somewhat uncommon to come across one that is...mediocre.

The reality of most film of all genres is that it's mediocre. You're often not totally bored. You find some engagement with the characters and then when the movie is over, you quickly forget it. Surprisingly, really bad films tend to stay with you a bit longer. 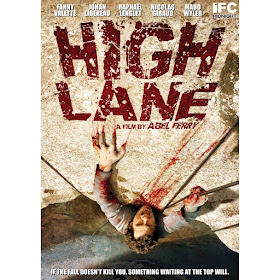 High Lane (2009) is one of those mediocre films that will likely drop out of my brain shortly after I write this blog. But that doesn't mean that I wasn't engaged by it. For a "horror-thriller" style film, set in the mountains, it was much better than most of its competitors, but that's not really saying much.

In any case the friends are composed of two women and three men. One of the women, Chloé (Fanny Valette), previously dated one of the men, Loïc (Johan Libéreau) and is currently dating one of the other men, Guillaume, (Raphaël Lenglet). This provides a bit of tension throughout the story, and indeed, is one of the subplots that raises this film above many of its competitors.

The group is lead by Fred (Nicolas Giraud), an accomplished climber who is sure that he can bring the group up into the mountains on a via ferreta route that is rusty and falling apart. Needless to say, he doesn't do a good job and the team gets caught in the mountains. And of course, the fact that they're caught is compounded by the fact that there is a delusional psychopath in the mountains that has set traps all over the place and might be a cannibal...or something. All of this leads to where most horror movies lead to, a combination of blood and guts and edge-of-your-seat tension.

There is one scene that is particularly interesting for climbers. The via ferrata completely falls apart and the climbers are stuck with two injured people in the forest above the cliffs. They have a rope, but pretty much nothing else: no gear, no extra clothes, nothing.

One of the great values of a film like this is that we tend to put ourselves in the characters shoes...and I have to admit that this was one time where I wasn't sure what I would do. The situation was incredibly difficult. Especially with the lack of equipment to rig anything. It's scenes like this that make this type of film worth watching. What would you do...?

High Lane is a French film that has been dubbed. This is a bit disconcerting at the start. I generally prefer films that have subtitles. But the dubbing is doubly disconcerting because there are sections in English where the characters lips line up, but then they start speaking in French again. This is annoying. However, the plot is just interesting enough to allow you to forget about the dubbing.

A second larger problem with this film is the way that the director (Abel Ferry) elected to cut together footage that was designed to raise tension.

Most directors would make three cuts where Ferry elected to make six or seven. The intent to create tension goes on for so long that there is no tension anymore...

Early in this review I noted that there is tension between two male characters over a female character. Though the characters actions are sometimes stupid (like fighting with one another while being hunted by a madman), this little subplot provides a small amount of depth to otherwise flat characters. It also provides a few plot twists that allow for a more interesting story.

The via ferreta sequences are mostly true to the way they would actually be...minus cables randomly breaking. That's a given in this kind of film, and I'm willing to suspend my disbelief. Indeed though, if nothing else, this film gets viewers psyched for cool via ferrata routes

High Lane is an engaging ride that explores some places that other similar mountain thrill-horror movies do not. But that doesn't mean it's a good movie...but if you've got nothing else to do, it might be worth an hour and a half of your time...