Conrad Anker and Jimmy Chin have been major names in the climbing world for a long time. Both of the athletes have built themselves into climbing superstars.  Conrad is world famous for his ascents and even made waves in the non-climbing world by finding the body of George Mallory on Mt. Everest. Jimmy is well known for his climbing photography and cinematography.

In 2004, I was living in Las Vegas and guiding in Red Rock Canyon every day. Many of my friends at the time were living the "dirt bag" lifestyle, living out of their cars and getting after it whenever they could. It was then that I met a young climber who had just linked up three huge classic lines in Red Rock. Renan Ozturk linked Epinephrine (5.9, IV), Cloud Tower (5.12a, IV) and Levitation 29 (5.11c, IV) in a single day. I was absolutely amazed. Each of those lines are not only big, but are nowhere near each other... 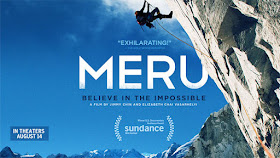 It didn't surprise me when I started to hear stories about Renan climbing with Conrad and Jimmy. There's no doubt that he had the chops to play in the same world class arena as the other two.

There have been several articles and films that featured each one of these climbers over the last several years. But none of them come close to the aesthetic quality and the human tension that exists in the film, Meru.

Meru tells the story of the three climbers and one mountain: Meru. Or to be more specific, the Shark's Fin of Meru, which is a massive granite peak that combines mountaineering, ice climbing, mixed climbing and A4 big wall climbing skills to ascend. Dozens of parties have tried the route, but no one had succeeded.

Conrad attempted the route in 2003 with Doug Chabot and Bruce Miller, but failed. They simply didn't expect it to be as challenging as it was. The film chronicles his return to the mountain with Renan and Jimmy in 2008 and 2011.

In the course of the film, we discover that all three of the men have dealt with close calls and loss. Conrad's mentor died first, and then his best friend. Renan becomes seriously injured in an avalanche. And Jimmy barely escapes from another avalanche with his life.

The three men all have different reasons for climbing Meru. It was a dream passed down to Conrad from Mugs Stump, his alpine mentor. It was a passion for Jimmy as he slowly brought himself back into the climbing and skiing world from his brush with death. And it was an absolute necessity for Renan to prove to himself that he still is who he was before his accident.

Meru is a beautiful film. The scenery mixed with the expert cinematography is breathtaking. But the real story is the story of the three men, mountain partners who work together to achieve a goal while sealing the bonds of friendship...

I had an unusual experience in this film. It was the first documentary-style climbing film that I had ever seen with a non-climber audience. Most of the films that I see like this are at Reel Rock Film Festival, at Banff Film Festival or at 5 Point Film Festival. The people watching films at these types of festivals tend to be like-minded individuals, who don't hyperventilate at the heights depicted or question the motives of the climbers.

It was valuable to have this experience watching the film with non-climbers, in part because hearing the reactions and the gasps of the audience reminded me what a beautiful place the mountains are, and how the images of what we do inspire others. But we need inspiration too. And that's where the value of a movie like this comes into play. Those of us who are not world class climbers need people like Conrad, Jimmy and Renan to inspire us. And a film like Meru does exactly that. It reminds us what is possible...