--The Cosley-Houston Route on Colfax Peak is in shape. But beware, it's always thinner and harder in the fall than in the spring...

--Gripped is reporting that, "Jennifer Shedden, 34, of Mammoth Lakes, and Michelle Xue, 22, of Los Angeles, were killed in a rockfall accident while climbing the North Couloir on Red Slate Mountain earlier (last week). Friends reported the two women were overdue and Mono County Search and Rescue sent a team along with a helicopter from the the California Highway Patrol. The women were found midway up a steep couloir at 3,700 metres on Monday. 'Based on observations from both teams, their positioning and lack of response they were presumed deceased.'" To read more, click here. Here's a piece from Rock and Ice about this accident.

--Gripped is reporting that, "Belgian climber Seb Berthe has freed The Nose on El Cap after an eight-day push. Climbing with partner Loic Debry." To read more, click here. 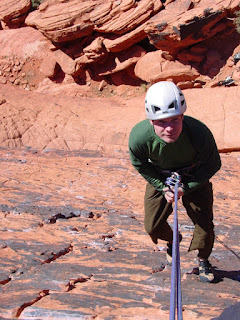 A climber rappels down the Panty Wall.

--It appears that there was an accident on the Panty Wall in Red Rock Canyon over the weekend. It's likely that the climber rappelled off the end of his rope. The Panty Wall has been the site of several rappelling accidents over the years, including two separate accidents that involved guides rappelling off the ends of their ropes. To read more, click here.

--The Desert Sun is reporting that, "as attendance soars at Joshua Tree National Park, plans to ease wait times and add visitor centers on the table." To read more, click here.

--Taking pictures near an edge is extremely dangerous. My rule of thumb is that you should never turn your back to the edge unless you're clipped in, if you're less than a body-length from the edge. Check out this close call at the Grand Canyon.

--Out There Colorado is reporting that, "A climber took a fall in Clear Creek Canyon over the weekend, on November 9, closing down US 6 while technical rescue crews preformed an extraction between US 40 and Colorado 119. While the condition of the fallen climber was not initially known, the climber was reported to be alert and mobile while on the trip to the hospital. The road reopened following the rescue." To read more, click here.

--Backcountry.com is in trouble. Big Trouble. They tried to sue several companies that used the word "backcountry" in their names, and the outdoor community went nuts... SNEWS probably has the best breakdown of what's happened with the Backcountry.com mess. The most recent update from SNEWS is that, "Circulating a letter of apology was the first step. Now, Backcountry CEO Jonathan Nielsen says he is making personal calls and visits to repair relationships with companies hurt in the online retailer's trademark litigation over use of the word 'backcountry.'" To read more, click here.

--Here is another perspective on the Backcountry.com debacle. This one looks at it from a "business" perspective.

--NPR is reporting that, "The number of people using goats to pack gear, game and food into the backcountry is rising rapidly, and national forests in at least 10 western states have proposed partial pack goat bans to prevent the spread of pathogens that could prove deadly to the west's iconic populations of bighorn sheep." To read more, click here.

--Elevation Outdoors is running a piece on the Roadless Rule, which is under attack. "Public lands management is almost always a contentious subject, but there are values that Americans overwhelmingly agree upon, at least at their broadest level: We care about conservation, and we care, as well, about opportunities to enjoy the places we all own in common. Despite these shared values, there are actually relatively few tools for land managers to protect these values in tandem. One of the most important–and least known–is the Forest Service’s 2001 Roadless Rule." To read more, click here.
Jason Martin at 6:00 AM