--It appears that there was a robbery by knife-point on the Cable Line Trail on Issaquah's Tiger Mountain. To read more, click here.

--Unofficial Networks is reporting that, "With ski resorts open from Colorado to Vermont, the 2019/20 ski season is underway. But Tahoe has been stuck in an Indian Summer that just won’t break. The snowpack in Tahoe is currently sitting at just 5% of the average for this time of year." To read more, click here.

--Gripped is reporting that, "The Xue Way is a new 5.11+ A0 up the south face of Half Dome, one of the world’s most iconic mountains. The first ascent of Half Dome was by George Anderson in 1875. Chris Koppl, Brian Pence and Vitaliy Musiyenko worked on the new mostly free route, with the exception of 10 A0 moves, for the past few years." To read more, click here.

--This is cool. There's a new physical therapist in Las Vegas that focuses on climber related sports injuries. To read more, click here. 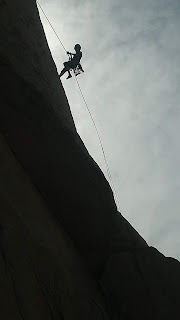 --Don't forget that next week is Thanksgiving, and one of the busiest times in places like Red Rock and Joshua Tree. If you're planning on camping and don't have a reservation, you should look into that immediately. It's also not a bad idea to have a backup plan.

--Fox 13 is reporting that, "Grand County Search and Rescue responded twice in 24 hours to the same place to rescue fallen rock climbers on Thursday and Friday. Two climbers fell while climbing routes on “Sister Superior,” a sandstone summit near Moab. Both were taken by medical helicopter from a narrow ridge at the base of a vertical sandstone wall. One was able to walk to a waiting helicopter, and the other had to be lowered to an area accessible to the helicopter." To read more, click here.

--Snews is reporting that, "Backcountry CEO Jonathan Nielsen said he received an online threat from someone last week after he released a public letter of apology regarding the company's trademark-enforcement strategy." To read more, click here.

--The Outdoor Industry Association is reporting that, "The outdoor industry has been hit hard by a tax “avalanche” as new tariff data from Outdoor Industry Association (OIA) indicates that American outdoor businesses have paid an additional $2.6 billion in punitive tariffs over last year, as the trade war with China rages on with no definitive end in sight. Additionally, total tariffs paid by American outdoor businesses in a single month on imports from China exceeded $1 billion for the first time ever in September." To read more, click here.

--A climber was injured in Arkansas when he suffered a 25-foot fall atYellow Rock Bluff in Devil's Den State Park. To read more, click here.

--There are apparently several reports of sexual assault in Mexico's El Portrero Chico. There is a thread on mountainproject that discusses this at some length, and it's worth reading if you plan to visit. To read more, click here.

--Reckless behavior in the mountains can have catastrophic consequences. Twelve-years-ago, Pete Absolon was killed when a hiker threw a rock off a cliff. Pete was climbing below. A pair of teenagers recently threw a log off a waterfall. A photographer was killed below. And skiers near Teton Pass have triggered several avalanches that rained down on the highway. Molly Absolon, Pete's widow, has some great thoughts about this in an editorial you can read, here.

--SGB Media is reporting that, "Alterra Mountain Co. announced that it has entered into an agreement to purchase Sugarbush Resort in Vermont, which will bring the company’s total to 15 year-round mountain destinations throughout North America, including the world’s largest heli-skiing operation. Financial terms of the deal weren’t disclosed." To read more, click here.

--The Burlington Free Press is reporting that, "Sugarbush Resort in the Mad River Valley has been sold to Denver-based Alterra Mountain Company, which also owns Stratton Mountain Resort. 'Sugarbush Resort is a premier East Coast mountain destination and we are excited to expand the Alterra Mountain Company family in the Northeast, with Sugarbush joining Stratton in Vermont,' said Rusty Gregory, CEO of Alterra, in a statement." To read more, click here.

--A group of Kuwaiti climbers unfurled a giant flag from their home country on Ama Dablam. The flag was big enough that it could be seen for miles. Controversy followed. To read about it, click here.

--Could National Parks be the best place to recycle your propane canisters? Maybe.