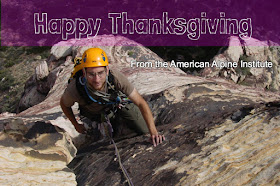 --The glaciers of Mt. Rainier are under serious threat. The REI blog has published a piece on this: "'From 1913 to 1994, for example, Rainier lost 25 percent of all its ice. And since 2003, they’ve lost an additional about 20 percent. So it’s accelerated.' This is part of a larger trend across the globe, with glaciers shrinking faster than before—and faster than previously thought—from the peaks of the Himalaya to ice sheets that terminate in the ocean, like in Alaska’s tidewater glaciers." To read more, click here. Another story about this topic appeared in the Seattle Times.

--Here's another take on the handover of a popular climbing area to the Squamish Nation...

--Elite climber Emily Harrington took a big fall on El Cap this week. She was simul-climbing with Alex Honnold when the incident took place on Freeblast (5.11, 10 pitches). See the Instagram post below, and read a comprehensive account, here. 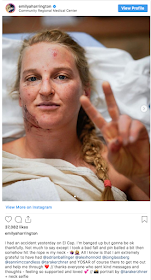 --Bicycle Retailer is reporting that, "A group of trail and forest advocates filed a lawsuit against the U.S. Forest Service for allowing Class 1 e-bikes on non-motorized trails in the Tahoe National Forest without first conducting a public study." To read more, click here.

--Here's an update on the helicopter that crashed in Red Rock Canyon on October 23rd. The crash resulted in two fatalities.

--The Hill is reporting that, "A new internal Bureau of Land Management (BLM) website designed to answer employees’ questions about the agency’s upcoming relocation out West says staffers should expect a drop in their overall pay. The information was included in an internal page available to staff seen by The Hill that contained questions and answers about the controversial plan to move most D.C.-based BLM employees and establish a new headquarters in Grand Junction, Colorado." It is believed that this process of moving the BLM headquarters is an attempt to gut the agency. To read more, click here.

--Apparently Eldora Ski Area was a zoo this week.

--In late breaking news last night, Rock and Ice and many other publications are reporting that, "Brad Gobright, one of the most accomplished free solo climbers in the world, died today, Wednesday, November 27, in an accident in El Potrero Chico, Mexico. He was 31, and raised in Orange County, CA." This appears to be a rappelling accident. To read more, click here.

--Outside magazine and many other outlets are reporting that, Jake Burton Carpenter, the founder of Burton Snowboards and one of the pioneers of the sport of snowboarding, died Wednesday night. Carpenter had announced early in the month that he was battling cancer for a second time. He was 65 and leaves behind his wife Donna and three sons, Timi, George, and Taylor." To read more, click here.

--A 21-year-old college student was killed in a rappelling accident in Louisiana this week. To read more, click here.

--The Hill is reporting that, "A key Senate panel has voted to fully and permanently fund the Land and Water Conservation Fund (LWCF), a move that conservation groups see as a significant victory." To read more, click here.

--Rock and Ice is reporting that, "Western Massachusetts Climbers Coalition (WMCC), Ragged Mountain Foundation (RMF), and Access Fund are pleased to announce the acquisition of Hanging Mountain, a new climbing area in Sandisfield, Massachusetts. Situated on 14 acres, Hanging Mountain may be the biggest find in Northeastern climbing in decades. Once fully established, this hidden gem will provide climbers with approximately 150 – 200 traditional and sport routes, some up to two pitches." To read more, click here.

--USA Today is reporting that, "The Trump administration has ordered rangers from national parks around the country to travel to the U.S.-Mexico border to fight illegal immigration and drug traffickers. It's an effort that comes as the Democratic-controlled House of Representatives has refused to fund President Donald Trump's border security plan, which calls for more barriers and beefed-up law enforcement along the border." To read more, click here.

--Jackson Hole has put together an awesome video on the life of their women ski patrollers. Check it out:

--The new Call of the Wild movie is a little heavy on CGI, but also looks like a great outdoor adventure movie. Check out the trailer, below:

--Speaking of CGI heavy films, there's also this thing from China that I posted a trailer from below. The Climbers is a film about climbers on a super CGI-looking mountain that appear to have some Vertical Limit-style problems :

--It sounds like there have been some serious problems with the Olympic qualification process. Many of  these problems appear to stem from the fact that Japan, as the country sponsoring the games, is responsible for a large part of the qualification process. It appears that Japan is reluctant to make final decisions for fear of choosing their own athletes poorly. This is a bit of an oversimplification of the problem, to really understand it, click here.

--One-hundred-and-ninety people were stranded on a Vermont Ski Resort for several hours on opening weekend. The skiers needed to be rescued. To read more, click here.

--Speaking of ski resorts, here is a list of the most visited resorts in the country.