Johnny Vegas is an extremely popular, extremely cool little route that can be found on the lower tier of the Solar Slab Wall in the Red Rock Canyon National Conservation Area. This phenomenal 5.6 or 5.7 route (depending on who you talk to) climbs up through three enjoyable pitches, all of which are in a spectacular position. 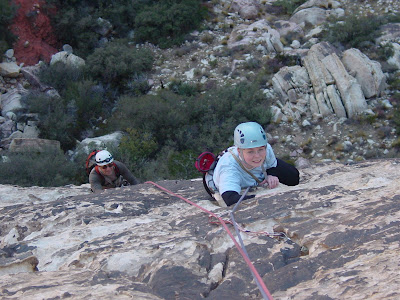 A father and daughter team low on Johnny Vegas.
Photo by Jason Martin

This is a slightly older route. It was put up in 1994, but didn't make it into a guidebook until 2000. The result is that this super classic line was overlooked for six full years.

In 1999, I was climbing Beulah's Book, a classic 5.9 found just to the left, when I saw a rock jock leading a 5.10 variation to Johnny Vegas. I looked down to see an older man with a very small frame encouraging his much younger partner on. The belayer was none-other than the iconic Red Rock climber, George Uriosite. 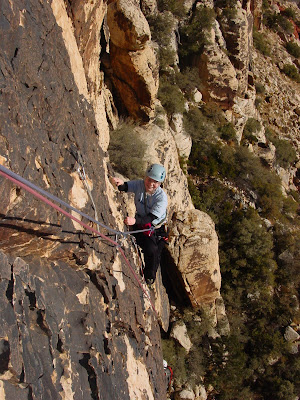 A happy climber on the second pitch.
Photo by Jason Martin

George and his ex-wife Joanne were Red Rock pioneers. They were responsible for dozens and dozens of classic lines throughout the park. It was very cool to meet such an important person in the history of Red Rock. And everytime I've run into him since has been just as great.

It was also cool to see those guys on a route that I knew nothing about. So I thought it was important as a Vegas local to get on that thing as soon as possible. The very next day my partner and I returned to the Solar Slab area to make an ascent of Johnny Vegas. And we were incredibly happy that we did. 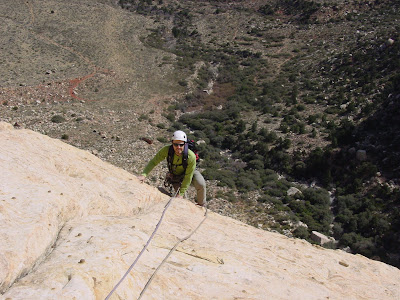 A climber nearing the top of the route.
Photo by Jason Martin

Since that first time on the route, I've climbed the line dozens and dozens of times. There are a few little things that people should know before sending Johnny Vegas:


This has become a super popular route. Make sure to get up early!