We use bolts nearly every day in our climbing. But many climbers don't take much time to assess them. Following is a short tutorial on bolt assessment. 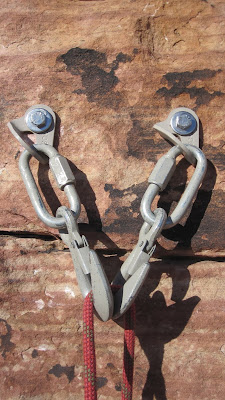 This anchor is constructed with sleeve bolts and mussy hooks. 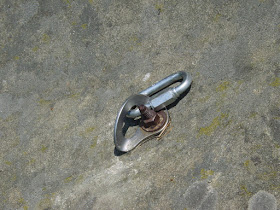 This rusty and dangerous bolt is a wedge bolt.
In this image, the bolt is galvanized and the hanger is stainless steel.
Incongruent materials (the combination of two different types of steel)
can also be dangerous.

The following video from the British Mountaineering Council discusses several ways to check a bolt while climbing.

Following are some from the video, as well as a few additional thoughts.

1) Make sure that the bolt is at least a hand's-width away from any cracks or edges.
2) Check the hanger for movement. Does it rotate? Or is it loose? If a bolt is loose and you elect to tighten it, don't crank on it, as you can damage the bolt or rock. Tighten until is is snug, and then put very light force (10-15lbs) on the nut.
3) Check the bolt for movement. If the bolt is loose, there's little you can do.
4) Is there damage or corrosion? Are the materials incongruent? Rusty bolts/hangers can snap off.
5) (Not in the video) If there is a significant amount of thread sticking out of the top of a nut on a wedge bolt, that can be a red flag. How much of the bolt is actually in the rock?
6) (Not in the video) Did the person who placed the bolt combine techniques? In other words, is the bolt both glued and mechanically engaged? There are some legitimate reasons that someone might do that, but more commonly the person didn't know what they were doing.

Glue-ins, if there placed appropriately, are extremely strong. Here's a short video on glue-in assessment for climbers:

1) Is the bolt in good solid rock, away from cracks or edges?
2) Does the bolt move?
3) Is there wear on the bolt from people lowering off?

The reality is that you may be forced to use a bad bolt in a lot of different types of situations. The goal is to identify red flags and then to build an additional safety cushion. Sometimes you can avoid the use of one of these bolts, and sometimes you can't. But at least -- after evaluation -- you know where you stand...