--The New York Post is reporting that, "The body of an accomplished Oregon mountain climber who was reported missing on Mount Hood was found in a crevasse about 9,400 feet up the state’s tallest peak, authorities said. The search for Austin Mishler, a 27-year-old wilderness guide from Bend, ended Thursday, two days after he failed to return from a planned climb of Eliot Glacier on the mountain’s northeastern slopes, according to the Hood River County Sheriff’s Office." To read more, click here.
--The Seattle PI is reporting that, "rangers at Mount Rainier National Park have recovered the bodies of two men from Tolmie Peak in the northwest corner of the park, officials said. Park officials said Monday the bodies were discovered on Saturday by hikers. An investigation so far suggests the people died from self-inflicted gunshot wounds in the previous few days, according to park officials." To read more, click here.
--The Vancouver Sun is reporting that, "a man found shot dead in a burnt-out vehicle on a logging road near Squamish in 2017 is now believed to be a U.S. man who started neo-Nazi groups and owed millions of dollars as an internet spammer." It's been reported that 38-year-old Davis Wolfgang Hawke, a U.S. resident, was a climber who never wanted his photo taken. The entire homicide is shrouded in mystery. To read more, click here.
Sierra:
--The Tahoe Daily Tribune is reporting on an expected massive shift toward the backcountry this winter. "When the pandemic hit Lake Tahoe last spring, most businesses closed, including ski resorts. Many were upset, frustrated and confused to have the season cut short, especially with feet of new snow in the forecast. However, along with snowmobilers and snowshoers, many avid skiers and riders turned to human-powered ways of getting their turns in on the mountain. Sales for backcountry equipment has skyrocketed and local shops are seeing a new wave of people wanting to get their hands on gear." To read more, click here.
--The Sierra Wave is reporting that, "the Inyo National Forest is reopening the majority of the John Muir Wilderness and a segment of the Ansel Adams Wilderness as the risk from wildfires is decreasing." To read more, click here.
--The Sierra Wave is also reporting that, "The Inyo National Forest has implemented 05-04-50-200-21, effective November 3. This opens the Inyo portions of the South Sierra, parts of the Golden Trout, most of the John Muir, parts of the Ansel Adams and all the Owens River Headwaters, and Hoover Wilderness Areas." To read more, click here.
Desert Southwest:

--Red Rock Canyon has started their reservation system for those who wish to enter the Scenic Drive. You can make a reservation at https://www.recreation.gov/. There have been and continue to be a lot of complaints about the system. Check those out, here. 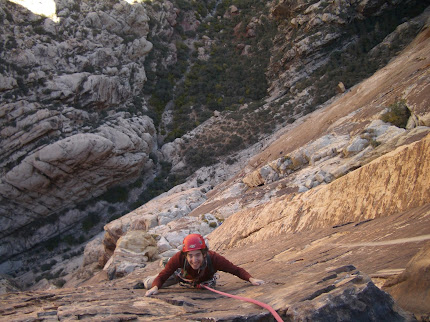 A climber high on Epinephrine (5.9, IV).
Photo by Rich Draves
--Climbing is reporting that, "Last week, Alex Honnold reported that he has broken the speed record on Epinephrine (5.9, IV), a 15-pitch route in Red Rock, Nevada. He soloed the 15-pitch route in 34 minutes and 51 seconds, beating out the late Brad Gobright’s record by nearly four minutes. Including the approach and descent, Honnold completed the outing in a mere 1:59:57. The average party spends 7-10 hours on the sustained route, which follows a network of airy chimneys." To read more, click here.
--It appears that Atman (5.10b), a short crack route in Red Rock Canyon, was bolted recently. The bolts were subsequently removed. This is the second time this has happened on the Yin Yang wall. 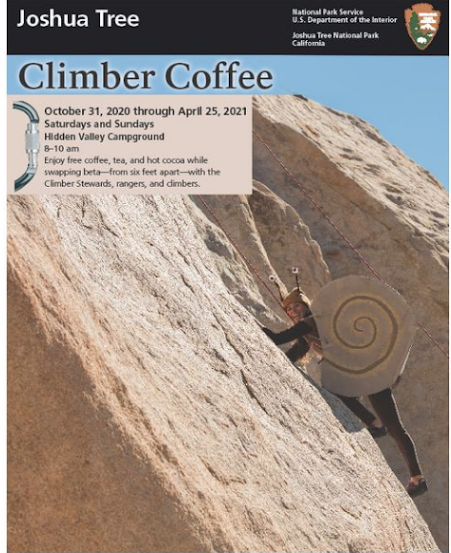 --A dehydrated abandoned dog was rescued in Joshua Tree this week...
Colorado and Utah:

--The climber that fell free soloing the Second Flatiron last week has died. To read more, click here.
--Out There Colorado is reporting that, "A Colorado county just tightened their COVID-19-related restrictions to make gathering in a group of more than five a misdemeanor, carrying a possible fine of up to $5,000. Pitkin County, home to the mountain towns of Aspen and Basalt, is cracking down on social gatherings ahead of Halloween weekend due to the "quick and steady" climb in COVID-19 cases. The mountain county announced stricter guidelines for personal gatherings on Friday, limiting gatherings to five people with no more than two separate households." To read more, click here.
--Rock and Ice is reporting that, "San Luis Valley Climbers Alliance (SLVCA), a local nonprofit organization of dedicated climbers, and Access Fund, the national advocacy organization that protects America’s climbing, are pleased to announce they have secured permanent access to Denny’s, the go-to crag for steep sport climbing in Colorado’s San Luis Valley. SLVCA now needs help to ensure the area remains stewarded and protected forever." To read more, click here.
--Teton Gravity Research is reporting that, "a federal judge has banned Virtika founder and social media personality David Lesh from entering U.S. Forest Service lands following numerous flagrant rule violations that most recently included posting a picture of defecating in Colorado’s famous Maroon Lake. As of this past Friday, 35-year-old Lesh will no longer be allowed to enter any U.S. Forest Service lands for the foreseeable future. On top of the ban, Lesh will be prohibited from posting any content on social media of himself or anyone else violating state or federal laws on any federal lands under the jurisdiction of the court, including National Forests, National Monuments, Bureau of Land Management land and other federal property." To read more, click here.
--The first human triggered avalanche took place over the weekend on Bald Mountain near Breckenridge. No injuries or burials were reported. To read more, click here.
Notes from All Over:
--The Bozeman Daily Chronicle is reporting that, "A skier died Tuesday afternoon after a crash in the Bridger Mountains near Sacajawea Peak, according to a news release from the Gallatin County Sheriff’s Office. Caroline Lupori, a Bozeman resident originally from Colorado, and another woman hiked in from Fairy Lake to ski the Great One on Tuesday afternoon. Lupori fell and sustained “traumatic injuries” while skiing the run." To read more, click here.
--We knew that camping was popular this year with the pandemic and all, but the reports out of Canada are crazy. Calgary CTV News reports on the numbers in Alberta: "Numbers from the province show a massive jump in provincial park campsite reservations in recent months, going from 5,209 in September 2019 to 286,657 in September 2020. That's an increase of more than 5,400 per cent." To read more, click here.
--InformNY Now is reporting that, Fifth grade students now have free admission to National Parks in the United States. Secretary of the Interior David Bernhardt officially signed a Secretary’s Order on October 28 that will waive entrance fees to national parks. This order will allow fifth grade students to have free admission to all United States national parks, wildlife refuges and public lands and waters." To read more, click here.
--The Sierra Club is reporting that, "On October 29, in a move that seems aimed at appeasing ranchers and hunters just days ahead of the presidential election, the Trump administration finalized a controversial rule which removes Endangered Species Act (ESA) protections for all gray wolves in the lower 48 states, excepting Mexican gray wolves in Arizona and New Mexico. The move, long in the making, turns over management of this imperiled species to states and tribal governments." To read more, click here.
Jason Martin at 6:00 AM