Northwest:
--The CBC is reporting that, "One man was killed in an avalanche near Mackenzie, B.C., on Saturday, according to RCMP. Two people were snowmobiling in the Powder King/Bijoux Falls area when the avalanche happened just before 2 p.m. PT. One of the snowmobilers was buried in the snow, according to a statement Monday." To read more, click here.
--SWX is reporting that, "Mt. Spokane Ski and Snowboard Park has changed its uphill skiing policy, shortening the time skiers are allowed to ski up and instituting a $50 season pass. The changes, which will go into effect when the resort opens in December, are temporary, said Jim Van Löben Sels, general manager for the park." To read more, click here. 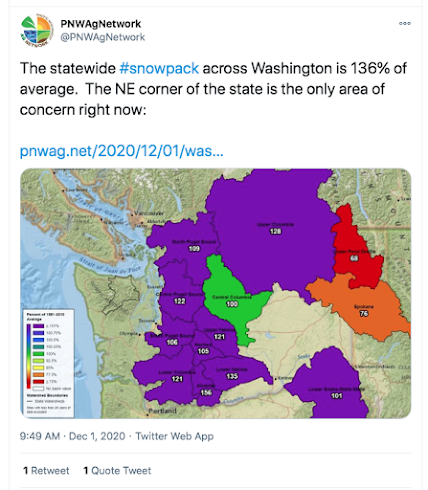 --King County Search and Rescue is reporting that they responded to 203 calls this summer. Up from 198 in 2019. Previously, 198 was the record. To read more, click here.
Colorado and Utah:

--The Daily Camera is reporting that, "a Boulder man was rescued Friday after dislodging a rock while descending a rock gulley, narrowly escaping a serious injury. The 36-year-old climber was in the 33,800 block of Boulder Canyon Drive and was able to take partial cover as the rock rolled over him, a news release from the Boulder County Sheriff’s Office said." To read more, click here.
--At least 28 human-triggered avalanches have already been reported in Colorado!
--So that monolith thing in Utah that appeared and disappeared. Climbers got rid of it. But weirdly, a similar piece of trash (monolith) appeared and disappeared in Romania.

Notes from All Over:
--A 39-year-old man died in a climbing accident at North Carolina's Hanging Rock State Park. It's not clear if this fatality was a scrambling or technical climbing incident. To read more, click here.
--The Bozeman Daily Chronicle is reporting on a skier fatality in Montana: "A skier died Tuesday afternoon after a crash in the Bridger Mountains near Sacajawea Peak, according to a news release from the Gallatin County Sheriff’s Office. Caroline Lupori, a Bozeman resident originally from Colorado, and another woman hiked in from Fairy Lake to ski the Great One on Tuesday afternoon. Lupori fell and sustained “traumatic injuries” while skiing the run." To read more, click here.
--We usually don't cover hiker rescues, as there are too many. But this one is interesting. From the Daily Mail: "An injured hiker who slipped and got trapped under a massive falling boulder in California for 12 excruciating hours has been miraculously rescued after he cut his pants open with a pen knife to get his phone and he dug his way out from under the rock." To read more, click here.
--The International Federation of Sport Climbing -- the organization that manages international climbing competitions -- has recently introduced three paraclimbing competitions. This is an excellent move towards representation for paraclimbers in the world of competition. To read more, click here.
--This is usually the time of year that the Banff Mountain Film Festival World Tour takes place. But due to the pandemic, it's not happening this winter. Instead, it is possible to watch the films online. There are two shows available. The cost for one program is $15 and it's available for three-days. The cost for two programs is $28, and they'll be available for fourteen-days. To learn more, click here.
--It is worth thinking about how the American climbers that will attend the Olympics in Tokyo next year are funded. Gym Climber has an article on that topic up right now.