It started with Survivor in the year 2000. It got better -- and worse -- when Bear Grylls appeared on the scene with Man vs. Wild in 2006. It got better -- and a little worse -- With Naked and Afraid in 2013. And then, it all culminated in the best wilderness survival show, Alone, in 2015.
I know. I know. There were others: Survivor Man (premiered in 2005), Alone in the Wild (premiered in 2009), Dual Survival (premiered in 2010), Man, Woman, Wild (premiered in 2010) and many, many more.
In Alone -- the best of them all -- participants are given a small amount of gear, including camera gear, and then they're dropped off somewhere remote. And then they have to live off the land for as long as they can, while filming themselves. Whoever stays out the longest, wins. The show is great, and well worth your time. But it's not why we're here today... 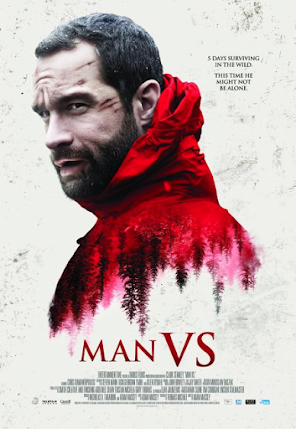 Inevitably, someone somewhere was going to take one of these survival shows and turn it on its head. They were going to make a film or a tv series where something goes wrong beyond what naturally exists within these reality programs. It finally happened with the film, Man vs., a 2015 movie that has made its way to the streaming services.
Doug Woods (Chris Diamantopoulos) is an outdoor survival expert. He is the host of an outdoor survival show that is a cross between Alone and Man vs. Wild. He gets a lost hiker profile from his producers and then has to survive using equipment that fits his profile. In the film, his profile is "lost nature photographer," so the only equipment he has is the equipment someone like that might have. After he has his profile, he's dropped off in a remote location, and then has to live off the land using only the provided equipment for five days. The whole time he's out, he films himself.
This feels like the premise of several of these types of shows. The difference? Woods is not in the woods alone. Someone is stalking him.
The shoot starts fine, but then things get weird. There's an odd earthquake. The fish in the lake are dead. And someone is messing with the survivalist's equipment and traps. It doesn't take long for us to realize that whomever is out there, is not friendly.
We have all been out there in the wilderness, in the dark and heard something, something that kept us up for hours. Was it an animal? A bear? A person? Something else...? This feeling is captured in the film. And there are a number of well-crafted moments where you're right there with Doug Woods. WTF is happening...? And that's when the film works the best.
There are also a number of moments where you're taken out of the film. His clothing is nowhere near warm enough. He doesn't have a sleeping bag. His shelter is crap. And the way he starts a fire is ludicrous. But that's not all. There are also some other goofy moments, where the story feels like it's jumped the shark. The implications are too big for the small story, and that can pull you out of it.
Chris Diamantopoulos is a charismatic lead. The character is mostly written well, and it's easy to empathize with him, to step into his shoes, and to feel his fear...especially as more and more things go wrong.
Even though the lead character is well-crafted, the story often isn't. Other characters are sketches. They say and do things that don't make sense. The "guide" who is supposed to watch over the backup crew is an ass right from the beginning who is absent through most of the movie. Why would they hire that guy? They ride in an RV, drinking whiskey at 5am. What? How are they going to get anything done? There are marital problems between Woods and his wife, but she gratuitously flashes him in a video hidden on his phone. Huh...? This is just a sampling. There are a lot more problems like this in the film.
All that said, the film is still entertaining. And it's worth watching on a streaming service, but it's probably not worth renting. The I've-been-there-in-the-woods-scared-of-something-in-the-dark part of the film works. And a few of the reveals work too. But it's no masterpiece...which really is too bad. Our community deserves a scary outdoor movie that's good...
--Jason D. Martin
Jason Martin at 6:00 AM