--Teton Gravity Research is reporting that, "The ski industry has lost a legend. Last Thursday, Mike Wiegele Heli Skiing announced that their founder Mike Wiegele had passed away at the age of 82. For the last 50 years, Wiegele’s name was synonymous with the best feeling in the world: skiing bottomless, untouched powder. In 1970 this humble farm boy from Austria offered his first-ever heli guided ski trip in Valemont, BC. It was a wild and revolutionary idea, but Wiegele was certain that it would take hold despite the lack of initial success." To read more, click here.
--A climber was injured at the bottom of the Pumice Ridge on Mt. Baker over the weekend. The individual slipped and fell on a steep pitch that many use to access the ridge. Here's a bit more on the accident. It should be noted that many recreational climbers are going up the steep pitch to gain the ridge. It is easier to go right and to climb up onto the ridge on second class trail near the toe of the ridge. This avoids the steep section.

This photo was taken from the easy access point to the Pumice Ridge. Many climbers are going up the yellow line, which is icy and exposed. If a climber goes right at the base of the ridge, they will find an easier line that converges with the yellow in the photo.
The green line is where it comes together.
--The speed at which the Coleman Glacier on Mt. Baker is shrinking due to anthropogenic climate change is stunning. Check out this article and the associated photos.
--The public lands managed by the Department of Natural Resources in Washington State have been closed due to wildfire hazard. To read about it, click here. 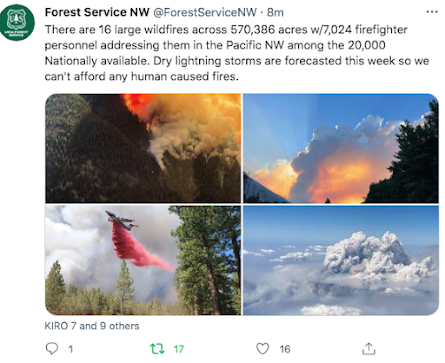 --Washington Pass remains closed east of the Hairpin. The climbing in the Pass can still be accessed, but it is not possible to get to Mazama that way.
Sierra:

--So a drunk guy started his car on fire to keep the bears away. It seems to have worked. But the guy was arrested for being under the influence and arson. To read about it, click here.
--There are fires burning near Mammoth Lakes and above Big Pine.
--Another fire is burning south of Lake Tahoe.

--Backpacker is reporting that, "Starting on July 16, some of the most popular trails in Phoenix, Arizona will close during extreme heat events, the city has announced. The trails, selected based on the number of rescues conducted there each year and the level of difficulty, include Echo Canyon Trail and Cholla Trail on Camelback Mountain and all of the Piestewa Peak trails in Phoenix Mountain Preserve. Those routes will now close between 11 pm and 5 pm when the city is under an excessive heat watch; the pilot program runs through September 30." To read more, click here.

--It's always sad when there's a fatality, but this is horrible. From SnowBrains: "A 40 year old Roosevelt man died after he apparently fell while climbing near Bridal Veil Falls in Provo Canyon on Saturday. A nine year old boy who was with him was not injured and came down from the mountain on his own. On July 17, shortly after 7:00 PM, Deputies with the Utah County Sheriff’s Office (UCSO) were dispatched to a report of a man and a nine year old boy missing near Bridal Veil Falls in Provo Canyon, UT.  The man, Adrian Vanderklis, 40, of Roosevelt, was climbing with his fiance’s 9 year old son above Bridal Veil Falls. The woman reported that she could see her son, who was crying, but that she could not see her fiance, and that she hadn’t seen him for 'several hours'." To read more, click here.
--Fox 31 is reporting that, "Emergency crews worked overnight to rescue an injured climber along Highway 14 in Poudre Canyon. The injured climber was 200 feet up and across the Poudre River, requiring a coordinated effort from multiple emergency rescue crews." To read more, click here.
--The Access Fund is reporting that, "Access Fund is excited to announce that it will put two Climber Stewards on the ground at Indian Creek in Southeast Utah this fall to help provide visiting climbers with information and resources to help them minimize their impacts at this increasingly popular and sensitive area." To read more, click here.
--9 News is reporting that, "Four women are sharing their stories with 9NEWS after police arrested their former coworker for allegedly taking lewd videos of them at work without their knowledge. Golden Police said Chun Min Chiang had 13,000 videos secretly recorded under women's desks, in restrooms and in changing rooms at various locations, many filmed while they were at work at the Colorado Mountain Club (CMC). Police also said they found 200 images and videos of suspected child pornography and exploitation." To read more, click here.
Notes from All Over:
--Snowbrains is reporting that, "a new study led by the Desert Research Institute in Reno, NV, has linked wildfire smoke exposure to an increased susceptibility to COVID-19. The study was published last week in the Journal of Exposure Science and Environmental Epidemiology." To read more, click here. 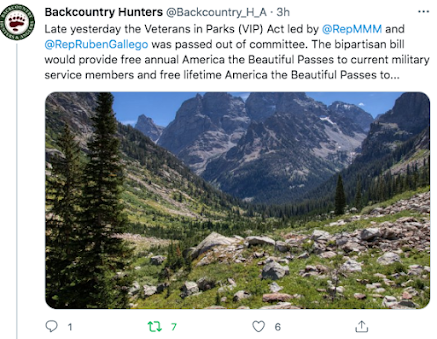 --The death of a 65-year-old nurse in Montana marked the fifth death due to bear attack in 2021. From Backpacker: "Last year, black and grizzly bears combined killed four people in Alaska and Canada, and in 2019, only 2 fatal bear attacks occured. Between 2000 and 2015, grizzly bears killed a total of two dozen people in North America, according to a report on nature.com. So with five months left of the year, 2021 is shaping up to be one of the deadliest years on record for bear attacks. But is that a fluke, or a larger trend?" To read more, click here.
--And finally, if you're looking for a serious waste of time. Check out MountainProject's climbing memes forum thread...
Jason Martin at 6:00 AM