Sender Films has long been a leader in the documentary filmmaking of climbers and climbing. They were originally responsible for the Reel Rock Film Tour, Valley Uprising and The Dawn Wall. All of these have had a deep impact on climbing culture, the way we see the leaders in the climbing world, and the way we see ourselves.
The Alpinist joins the ranks of the other films within their portfolio. This profile of the iconic Canadian climber, Marc-André Leclerc takes us into the mind of one of the world's leading young alpine soloists as he makes extreme ascent after extreme ascent.
Like The Dawn Wall or Free Solo, the film explores not just the serious side of this individual, but the quirky elements of a climber. It covers the weirdness of Marc-André's dirtbag lifestyle, living in a stairwell. It covers his experimental drug phase. And it covers his obsession with soloing hard and very serious alpine climbs, things that anyone would be proud of completing with a partner. And finally, it covers the young man's untimely death...
This is an engaging, funny and often scary, film. We are certainly transported into a different world, a world that is a throwback to climbers of old. Marc-André didn't post on social media, he didn't have a following aside from inside some internet forums, and he didn't even have a phone. We got to see an old-school adventurer taking on things in a way that was -- at least in his mind -- very pure. 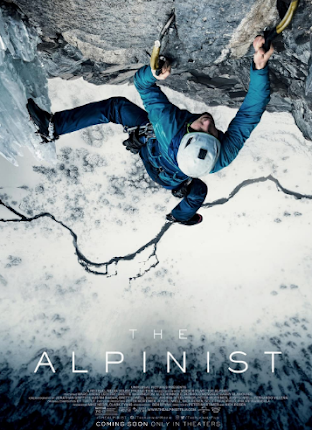 The psychology of Marc-André in the film was a bit tough though. And maybe this is my age and my experience managing people, but there is a moment in the film, where the filmmakers can't find the young climber. They have no idea where he is. And he certainly doesn't pick up his phone. They're frustrated, and in some ways, it's easier to get into the minds of these people who are managing a project, than into the mind of an early-twenties individual that doesn't believe in social media or phones...
And this is a weakness in the film. We think we know who Marc-André is, but just barely. I'm not sure we got as deeply into his mind as we got into the minds of people like Tommy Caldwell or Alex Honnold in similar films. But I'm not sure this is the fault of the filmmakers. Marc-André was a tough subject.
There is a piece of adventure documentary filmmaking that has become a little overdone with these types of films, and that's the outside commentary. The filmmakers find well-respected members of a given community and have them talk about the documentary subject's adventures. Inevitably, someone will say, "who is this guy?" They'll say what the person is doing is "groundbreaking," or the "future of the sport." And then -- like with Free Solo -- they'll talk about the danger that the person is facing while completing his adventures.
It's a bit of a contradiction to say, in one paragraph that we didn't get to know Marc-André well enough, while in the next to say that there was too much outside commentary on him. And this really gets to the heart of the difficulty of making a film about someone like this. We want to know this person. We want to know their motivations and who they are. But their motivations and who they are are obscured by the fact that they're not totally interested in our interest in them...which is not something we're used to in the 21st Century.
Criticism aside, this is a good film. And it's a hard film.
When Marc-André death is presented late in the film, there wasn't a dry eye in the theater. No. Maybe we didn't know him as well as we could have. We wanted to know him better. We wanted to understand him and see him continue to succeed in the mountains.
But now he's gone...
And in his passing, we are left with what we're always left with when a person dies in the mountains: Deep feelings of grief. Grief for the loss of a special person. As well as grief for that person's family and friends.
The documentary film crew gave us a glimpse into this person's life. And for that, I feel gratitude. We all got to know somebody who left us far too early. In many ways, The Alpinist film was a beautiful and thoughtful memorial to Marc-André Leclerc...
--Jason D. Martin
Jason Martin at 6:00 AM