The Culture of Youth and High Stakes Risk

Late May and June were interesting months in the outdoor world. Most of the high end climbing was taking place in the Alaska Range and in the Himalaya. Japan's Giri-Giri Boys completed a new route in the Ruth Gorge. Ubber-climber Colin Haily completed an ascent of the Cassin Ridge in seventeen hours. And a Kazakh climber added a new line to Mount Everest's closest neighbor, Lhotse.

But while all of this high-end end, high-stakes alpinism was taking place, something else was going on, something much quieter. Two teenagers were engaging in risky endeavors where the stakes were just as real as the stakes being sought by world class alpinists.

In one venue, thirteen year-old Jordon Romero became the youngest person ever to summit Mount Everest. And in the high seas 2000 nautical miles off the Western Australian coast, sixteen year-old Abby Sunderland was foiled in her attempt to make a solo sailing tour around the globe.

Jordon climbed Everest via the more technical north side and opted to go without a professional Western guide. There has been quite a bit of controversy about whether or not someone so young should be allowed to climb at such altitudes. It's not terribly clear what altitude does to teenagers. It tends to affect young adults more radically than older adults, so it might be possible that there could be serious cognitive effects from extreme altitude on a still developing brain. There are a lot of questions about whether or not he truly understood the magnitude and the potential risk involved in such an ascent.

After Jordon summitted, a Sherpa guide announced that he would take his nine year-old son to the summit. Nepali authorities do not allow climbers under the age of sixteen, so he too would have to climb from Tibet. Shortly after this announcement, the Chinese closed the north side to anyone under the age of eighteen. As a result, Jordon will remain the youngest person ever to climb Mount Everest.

Jordon is only one mountain away from completing an ascent of all seven summits. He plans on climbing Antarctica's Mount Vinson sometime late this year. 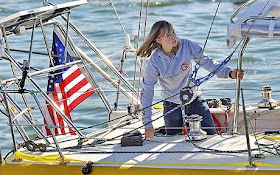 Sixteen-Year Old Abby Sunderland
After five months at sea alone, Abby Sunderland was rescued by the Australian authorities. She encountered thirty-foot swells and her boat was severely damaged. The teen lost her ability to communicate with the outside world and many feared the worst. A fishing vessel rescued her from the remnants of her damaged boat.

One might argue that this is a bit more dangerous than Mount Everest. On the mountain, you have your team to fall back on. On a solo voyage around the globe, you only have yourself. If something goes wrong and you can't fix it, then it's all done.

Some reports indicate that Abby's father signed a deal with reality TV producers shortly after the teenager set sail. It wasn't terribly clear what the show was going to be about, but it was likely going to feature all seven of Laurence Sunderland's "daredevil" children and was to be entitled "Adventure's in Sunderland."

The current rumor is that the television show is dead, but it sounds like all is not lost in media land. Indeed, some articles indicate that book deals, documentaries and other reality television projects are all a possibility for the family. Abby's father denies all of these rumors.

Abby is not the only teenage woman to attempt a solo circumnavigation of the globe in a sailboat, Australian Jessica Watson finished just such a journey on May 16th.

The Christian Science Monitor notes that:

A Dutch judge stopped a 13-year-old girl from trying to sail around the world last year. The Dutch Child Protection Agency had asked that the girl be placed under state custody, calling her plan to spend about two years circumnavigating the world aboard a 26-foot boat "irresponsible."

So is it responsible to send your child on an adventure such as this? At what point do you have to say, maybe when you're a bit older? Is it fair to tell your child to dream big and then to lock him or her in the closet?

There are no easy answers here. I have two small children and I could easily see them climbing Mount Baker at fourteen years-old, but not Mount Everest. I don't know much about sailing, so it's hard for me to be comfortable saying that I could see them sail alone across a smaller body of water than an ocean, but maybe I would. It depends on who they are when they are that age...and perhaps more importantly, who I am when they're at that age...