Super skinny ropes are becoming more and more common among high-end alpinists. Twin rope systems provide a climber with the ability to do double-rope rappels with just a bit more weight than a single line. They provide additional security should one of the lines get cut or damaged during a lead. And lastly, they are a bit slick when it comes to rappelling.

It's this last item -- providing more friction on the rappel -- that we will address in this blog today.

As with most of the things that we address here, there are many ways to add friction to a standard device. The first and most popular way is to simply add a second carabiner to the rappel. This decreases the size of the holes in your belay device and increases friction because there is more ground for the rope to run over.

The second way, while less popular, works just as well. In this system, the rope runs in a Z, running down from an extended device to the climbers leg-loop, being redirected back up above the device to a carabiner and then down to the break-hand. 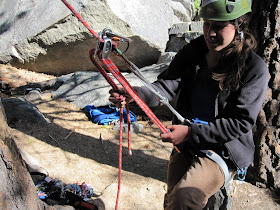 The preceding picture is slightly difficult to see as there is shade on the climber; but you will note that the climber is holding the rope with her left-hand. The rope runs down from above and into the device. From the device it runs through her hand. There is a autoblocking hitch clipped to her belay-loop in her hand. From the autoblock, the rope runs to the leg-loop, is redirected off a carabiner and runs back up to the top. At the top, it is redirected off of another carabiner and the backside goes to the breakhand.

Some of you will probably end up pointing out that the woman in the picture is about to rappel off the end of the rope. Rest-assured, she was on the ground when this picture was taken and was just setting up the system to practice. 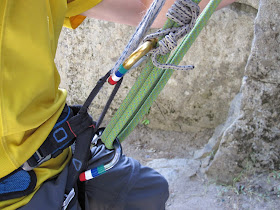 In the preceding picture, it is possible to see how the autoblock is engaged and how the rope is redirected back up. 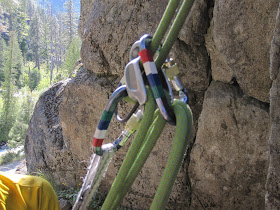 After the rope is redirected off the leg-loop it is then again redirected off of a carabiner clipped to the line coming out of the top of the device.

This is a somewhat complex system to demonstrate here, but if you put it together, it will make sense once you see the ropes moving through the system...

Adding friction to a rappel is an important skill to have. Whether you use this system or add an additional carabiner, it might be a good idea to practice before you actually need additional friction. This will decrease the liklihood of a mistake when doing it for real...