The Worst Climbing Movies Ever

For a non-climber, climbing is a foreign thing. All of the participants are adrenaline junkies looking for their next fix. This perception in conjunction with a serious lack of knowledge about climbing culture have come together over the years to provide us with some very bad climbing films.

You might think that there is little to no value in a poorly executed climbing film, but you would be horribly wrong. The value in these films is wholly unintentional. Most people can suspend their disbelief under certain circumstances. If there is something unrealistic here or there, we usually choose to ignore it. But in some films, it is utterly impossible to ignore the problems. They get it so wrong, yet play it so straight, that the films actually become quite comic.
The worst offenders take poor plot-lines, poor dialogue and incredibly ludicrous climbing scenarios and successfully -- though unintentionally -- weave them into a cinematic mess that is so unbelievable they seem surreal. Three films stand out as the worst of the worst. And indeed it is because these are the worst offenders that they are so fun to watch.

Cliffhanger (1993)
Synopsis: A high end climber and search and rescue expert -- who lost a friend in a tragic, but totally avoidable, climbing accident -- is forced to assist a group of gun-wielding thieves in their quest to find boxes of money scattered throughout the Rocky Mountains. Oh yeah, as this is a Sylvester Stallone movie, he does this mostly in the snow wearing a t-shirt. And sometimes he's even topless... 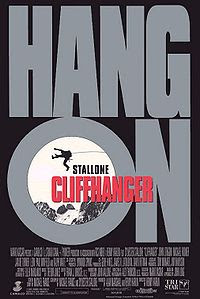 Cardboard characters, racial and ethnic stereotypes, and a script that is so unrealistic that there isn't a moment of the film where one doesn't laugh at the stupidity of the characters are all components of the vast majority of the Stallone films. This one certainly does not stand out as being different or of a higher quality.

Cliffhanger does have a few didactic moments for climbers. We learn that it is really not a good idea to shoot a machine gun at the cornice that you're standing beneath. We learn that we should be terrified if the stuffed animal in our backpack falls. And of course we learn that you shouldn't mess around with Rambo.
Suprisingly, the original storyline of this film was based on a true story. Climbing author, John Long, gets story credit for the film. In 1977, a plane filled with marijuana crashed in the Lower Merced Lake in Yosemite National Park. At the time it was winter and the lake was difficult to get to. Long lived in Yosemite when this happened and watched the incident unfold. It is likely that his original story pitch represented this true story, but was warped by Hollywood into a Sly Stallone vehicle which really is too bad.

Synopsis: A high end climber and photographer -- who lost his dad in a tragic, but totally avoidable, climbing accident -- must rescue his sister from a crevasse as well as from a crazed climber. Oh yeah, and he's supposed to do it with bottles of nitroglycerin. On K2. 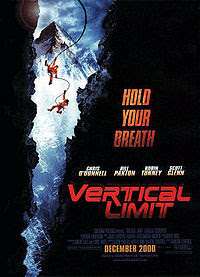 A great deal has been said about this film in the climbing community. Indeed, it may be possible that this was the most talked about "bad" climbing film of all time. Why? It's just way over the top.

In the opening scene, somehow all kinds of cams and pins rip out of a desert tower leading to an incredibly unrealistic accident. Somehow they mixed up the party scene in Joshua Tree National Park with base camp on K2. And somehow, they thought that a mountain climbing rescue drama needed a few things to spice it up. It needed a villainous character who murders people high on the mountain. It needed characters wandering around on the glacier with full racks of shiny cams with no rock climbing in sight. And clearly to make any climbing movie realistic, you need to have unstable nitroglycerin.
A lot of people like to talk about leading man, Chris O'Donnell, and his radical running leap over a chasm high on K2. My question is, have you ever run in crampons? Have you ever run at altitude? Were that me, I would have probably tripped over my crampons while hyperventilating, thus falling down to the bottom of the bottomless chasm.

I know that I'm not the only one who noticed another problem with O'Donnell's portrayal of a world-class climber. Every time he talks to his sister (Robin Tunney) throughout the film it looks like he's trying to seduce her. It appears that O'Donnell only knows how to play one thing while working with a female counterpart on screen and in light of these two character's relationship, it's a little bit icky.
Vertical Limit was way over the top. Every scene was an excercise in excess. And every beat of the story seemed more unrealistic than the previous. It's likely that this was -- to some extent -- intentional. Film-makers often build action with sequences that are more and more dramatic throughout a movie. In Vertical Limit, this one-upmanship did not lead to an edge of your seat movie experience. Instead, it lead straight to serious unintentional comedy.

Synopsis: A bad boy from the city -- who was in a tragic, but totally avoidable accident with a stolen car -- hangs out with a bunch of inept climbers who appear to have near-terminal cases of ADHD. Oh yeah, he does this to pick up a girl. 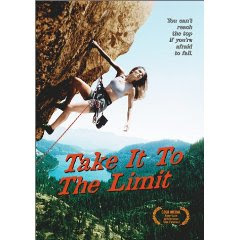 Famous B movie producer Roger Corman was behind this strange adventure. And ironically, even though it is a B movie, this film probably has the best script of the three. The problem is that with little to no knowledge of climbing culture or climbing itself, an okay script turns into an exercise in the ludicrous.
There are a few scenes that stick out as being over the top. There's the time when the hero and his girlfriend get stuck on a cliff approximately a hundred feet up a third class pitch with no way to get down. Then there's the time when they go "climbing" on a water tower; only to leave the hero stuck on top because he doesn't have climbing shoes. And then there's the time that they go toproping, but they give each other so many high fives when it's suggested that you literally wonder what they were smoking.

Perhaps the best part of the entire film is the rap. A rap, you say? Yes, a rap. Every time they go climbing the rap starts. It goes something like this:
By no stretch of the imagination is this a difficult rap. No, it probably took about ten minutes to write. But if one thing is for sure, once you see Take it to the Limit, you won't be able to get the words Take it to the Limit, out of your head...

Ironically, outside the climbing world, these three movies no longer have a life of their own. Clearly, they weren't just bad climbing movies. They were just plain bad. For better or worse, we're responsible for keeping these movies alive. I suppose I can live with that...

Trailers for Cliffhanger and Vertical Limit may be seen below. Follow the link to watch the trailer for Take it to the Limit.

Take It to the Limit