The Klickitat tribe of Washington and Oregon has a fantastic legend about an ancient dispute between two brothers that we now know as the Cascade volcanoes, Mount Adams and Mount Hood.

Long ago, Tyhee Saghalie, the chief of all the gods traveled down the Columbia river with his two sons in search of a place to settle. The sons, Pahto and Wy'east, had a difficult relationship and so when they finally came to a beautiful area where they wanted to live, the sons quarrelled. Each of them wanted the land for himself. 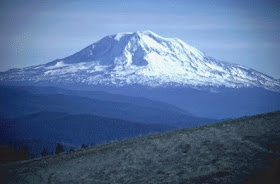 Saghalie wanted his family to be content, so he built a bridge between the north and the south. This bridge became known as the Bridge of the Gods. And for many years the family used the bridge to meet.

But there was a problem...

Both of the sons fell in love with a beautiful young woman named Loowit. And this young woman was indecisive. She could not choose between the two chiefs.

So Pahto and Wy'east went to war with one another. They threw fire at each other and destroyed the Bridge of the Gods. When the bridge fell the earth was devestated. Villages and forests were destroyed and indeed, the collapse of the bridge created a massive rift between the north and the south which we now know as the Columbia River Gorge. 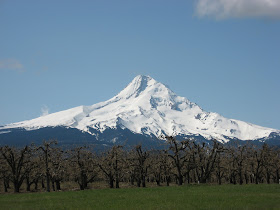 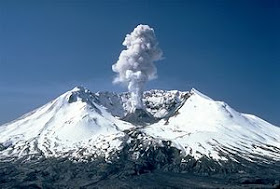 Mount Saint Helens
In recent decades, it seems that the biggest hothead of the three was Loowit. Pahto and Wy'east should have treated her better so that she didn't blow her top!