Climbing and Outdoor News from Here and Abroad - 8/5/21

Olympics:
--Early this morning, the men's combined finished, and the medals were awarded: 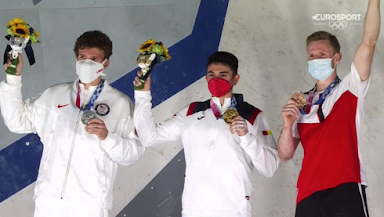 American Brooke Rabotou also made the finals and will compete in the women's combined tomorrow. For more info, click here.
Northwest:
--Fox 12 Oregon is reporting that, "The search for climber who has been missing on Mount Jefferson since last week has been suspended, according to the Linn County Sheriff's Office. Just after 11: 30 a.m., on July 23, the sheriff's office received information about a climber, identified as Steven Van Pelt, 33, of Salem, who had fallen during his descent on the mountain. Deputies learned the climber had fallen among 'extreme mountain terrain.' A witness described losing sight of him after he fell several hundred feet." To read more, click here.
--City News 1130 is reporting that, "A climber was transferred to hospital Sunday afternoon after taking a serious fall near Squamish. Tyler Duncan with Squamish Search and Rescue says the climber suffered significant injuries to their head, arm and chest. 'We had a climber take a bit of a slip and fall down a 65-foot gully. He had a tumbling fall at an area called ‘Area 44’ which is a climbing area just north of Squamish, in the Chek Canyon.'" To read more, click here.
--The Cascade River Road was briefly open, but storms this week closed it again...
--There's a guy in the PNW that's trying to do the fastest known time on the Bulger List. This is the list of top one hundred peaks in Washington by altitude. Kind of interesting...
--And here's some mountain trivia for you!

--Here's an older rescue story about a guy who got hit by a rock while bivying on El Cap. This piece covers the rock hitting Matthew Alexander, rupturing his orbital lobe and exposing his brain, and the following rescue.

--Snowbrains is reporting on the closure of I-70: "Implications from the Grizzly Creek Fire are still being felt today and are impacting commerce, tourism, and residential living in Colorado. Constant rainfall has led to the 'rainiest July in 10 years' in many parts of Colorado, and in turn, there have been countless mudslides, especially in Glenwood Canyon on the burn scar of the Grizzly Fire. 'There are areas that are under 10 feet or more of mud at this point,' said Governor Polis, and he does not expect the Interstate to be fully functioning again until ski season." To read more, click here.

Notes from All Over:
--A female climber suffered a 20-foot fall followed by serious injuries at Summerville's Lake, West Virginia. There is currently limited information about the fall. To read more, click here.
--The International Olympic Committee has announced that ski mountaineering will be an event starting in 2026! To read more, click here.
--From Gear Junkie: "The portal between worlds has opened; a global celebrity will officially produce a primetime TV show about rock climbing. If you’re a rock climber (or a celebrity) and you never thought this would happen, well, the future is now. Jason Momoa joins forces with Chris Sharma to introduce The Climb, which will air in eight episodes on HBO Max. In its official description, the streaming service even sounds like Sharma: 'a visually arresting and life-changing adventure that represents the foundations of rock climbing and the exploration of the human spirit.'" To read more, click here.
--Outside is reporting that, "fifty-two days, eight hours, and twenty-five minutes. As of Thursday evening, that’s the record Timothy Olson appears to have beat running from border to border, Mexico to Canada, on the Pacific Crest Trail. Once Olson’s own time is confirmed, he will have completed the PCT faster than anyone ever before. According to his Instagram account, his unconfirmed time is 51 days, 16 hours, and 55 minutes." To read more, click here.
--And finally, this looks really good:
Jason Martin at 6:00 AM