The American Alpine Institute will present eleven awards to eight different companies at the annual Outdoor Summer Retailer Show in Salt Lake City.  The equipment and clothing awarded the AAI Guides Choice designation have proven to be the highest quality in their product category. The awards are determined on the basis of excellence in design, performance, and durability demonstrated in rigorous international field tests conducted by the professional guides of AAI. Evaluations are made throughout the year in the desert, cold weather, rain, snow, high wind and in high altitude environments.

A core group of AAI professional guides conduct Guides Choice field tests year round, throughout the world. Tests may be completed in a single long season (for example five summer months of intensive climbing in South America), or over several seasons (for example McKinley expeditions in the spring and Himalayan expeditions autumn). Because of the intensity and constancy of use, the wear and stress that gear receives during these tests corresponds to many years of use by a recreational climber. 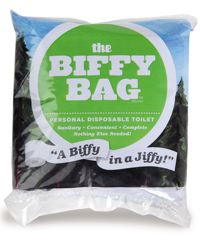 As more and more people venture into the backcountry every year, management of human waste become increasingly important to protecting the health of our pristine wilderness areas. Weighing only 65 grams the Biffy Bag system is smaller and lighter than all of the competitors. Our guides liked that the system is made up of two independent bags, minimizing the possibility of a puncture leading to nasty situation. The Biffy Bag is unique because its design allows it to be used easily without a bucket or commode.  The user simply ties two straps around their waist, pulls the bag up between their legs while squatting to do their business. The Biffy Bag kit includes, an odor-proof zip-top transport bag, 1 biodegradable inner bag, an ample amount of toilet paper, Biffy Powder (neutralizing agent) and a sanitizing hand wipe. 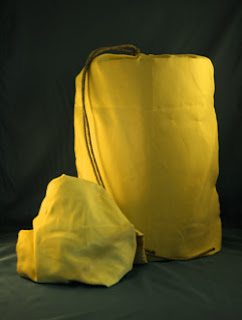 In many locations it is not bears that you need to worry about getting into your food, but rather the small gnawing critters that like to chew silver dollar sized holes in backpacks, tents and stuff sacks to get at the food you are packing. Our guides found the Ursack Minor to be a perfect solution to keeping their food protected from these destructive little varmints. The Ursack Minor is made of the same very densely woven material used in body armor meant to protect against stabbing from knives. The bag’s closure method is kept low-tech with a specific set of knots, thus eliminating the chance of a buckle closure breaking. The closure cord can also be tied around something sturdy to keep larger rodents from dragging off the entire bag of food. AAI testers have witnessed everything from mice, birds and other rodents trying to chew through the bag with no success. Weighing in at a scant 2.7 ounces and with an ample capacity of 650 cubic inches there is no doubt that the Ursack Minor is the perfect solution to protecting food from critters in the backcountry. 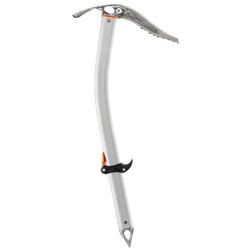 Since its debut in 2009 we have taken pride in the Sum’tec for its versatility in different alpine climbing environments. The Sum’tec is equally at home on a glacier slog, as it is on a steep alpine ice climb. The adjustable Trigrest is easy to slide up to the head so it is out of the way when plunging the axe in the piolet canne on a glacier and can be slid down toward the spike and locked when swinging in piolet traction on steeper ice routes. The slight curve in the shaft allows for clearance over ice and snow bulges when climbing the steeps, but isn’t curved to the extent where it creates problems self arresting or plunging the axe while on lower angled glaciated terrain. The Alpix pick can be replaced, so a dulled down pick doesn’t mean the death of your axe. At 485 grams in the 52 cm length the Sum’tec has achieved the fine balance of being lightweight, yet still has enough head-weight to make sinking the pick in harder ice effective. 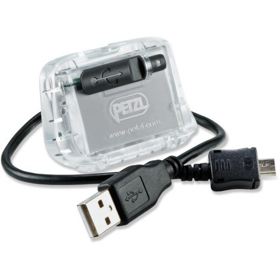 Petzl impressed us all with the release of the Core rechargeable battery. We tested the Core from the bitter cold of Alaska, to the rainy and wet Cascades, and it lit our headlamps reliably the entire way. At only 30 grams the Core is actually several grams lighter than three alkaline AAA batteries. As alpinists we appreciate any weight savings that can be had. Instead of rummaging around for fresh batteries before each trip the Core can simply be plugged into any standard USB charger to top off its charge. The ability to program different brightness and burn times into the Core using Petzl’s OS proved to be another highlight of the Cores features. All in all the Core is lightweight, customizable and keeps lots of batteries out of landfills, so there is nothing bad that we can say about it. 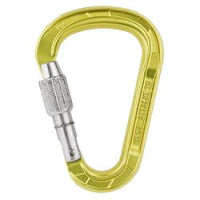 Our guides have been using and abusing the Attache 3D since its release in mid 2009. Almost two years later we are still impressed with how light and versatile this locking carabiner is. Despite being trimmed and shaved down in every way to a mear 55 grams, the Attache 3D is still very durable. The Attache 3D is large enough to be considered a munter biner, and can be used for almost all applications in rock climbing as well as mountaineering where a locking carabiner is needed. The keylock nose prevents snags on slings, and gear loops and the gate design is kept low profile to allow for easy rotation around belay loops to avoid cross loading. The gate opening is 2mm larger than the original Attache so getting clipped and unclipped from clustered anchor setups is just a little bit easier. 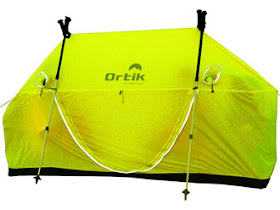 The Tupek provided piece of mind to our guides climbing in Alaska that at any point they could deploy a two-person shelter and escape from the wind and blowing snow within the matter of a minute or two. At 525 grams and the size of a 1 liter water bottle, it was small and light enough that our testers had no problems packing it along on any fast and light ascent that they were doing. The Tupek can be set up using a variety of configurations including with or without trekking poles, one or two people, and can even be hung from a wall. The floor of the Tupek is joined at the middle with velcro, but can be separated and pushed to the sides in the event that the user is wearing crampons. A small foot well can even be dug in snow so that the users can sit facing each other comfortably. If an overnight bivy is inevitable, two people can stretch out in reasonable comfort reclined against their packs. A door on one side makes getting in and out easy, and multiple vents keep condensation to a minimum inside. 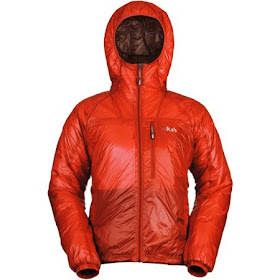 When it comes to insulated jackets, the warmth to weight ratio is key. Rab has managed to increase the warmth and decrease the weight with the release of the Xenon Jacket. 60 grams of Primaloft One insulation was more than adequate to keep testers comfortable in the cool times during spring, summer and fall. The Pertex Quantum 10D outer shell fabric is even lighter, and despite the almost see through appearance the newer Petex is actually more robust than previous versions. The Xenon has no problems shedding snow and light drizzle, and blocks out the wind very well. To cut even more weight, the hood is cut to fit close to the head and be worn under a helmet. The hand warmer pockets lack zippers (another weight saver), but there is a zippered chest pocket that doubles as a stuff sack. The combination of being warm, lightweight, and very packable make the Xenon Jacket perfect for cutting the chill while mountaineering, rock climbing, ski touring, and backpacking. 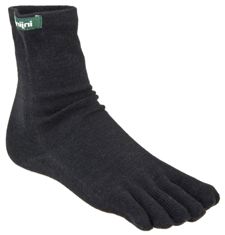 Anyone that is plagued with blisters on their toes while hiking will appreciate Injinji Socks. Because Injinji Socks have individual toes the skin on skin contact between the toes is eliminated. Having the toes act as individual units while hiking providing a more natural feel. The fabric between the toes also gives sweat a way to be transported out from between the toes, resulting is a drier feeling. On Denali our guides found them to work really well as a liner sock in their cold weather footwear system. The NuWool material is Injinji’s own merino wool that provides a high level of moisture wicking that allows feet to stay warmer in cold conditions and cooler in hot conditions. One other added benefit is that you can rock these socks with flip-flops! 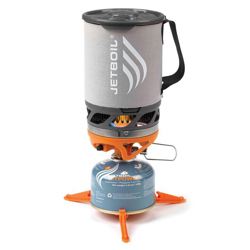 All Jetboil cooking systems are tired and true to being lightweight, efficient, and convenient. The Jetboil Sol Ti Premium Cooking System is no exception. With a titanium cook pot the system is super light weighing in at a scant 12.2 ounces. The Thermo-Regulate Burner Technology it is even more efficient at cold temperatures allowing the user to consistently boil up to 12 liters of water per standard Jetboil fuel canister. And non of the convenience is lost in the weight dropping or efficiency boosting changes. In the Sol Ti Premium System Jetboil even includes a pot stand that allows the cook to use a normal cook pot instead of the Jetboil mug, if cooking needs to be done for more than one person. The Sol Ti is definitely something that any lightweight gear junkie would love to get their hands on! 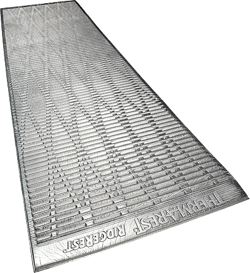 The Ridge Rest Solar and SOLite are Cascade Designs newest closed cell pad additions to the world of sleeping pads. These pads have one surface that is aluminized to reflect body heat back up toward the user. The Solar is slightly thicker at 2 centimeters giving it an R-value of 3.5. This added material and reflective surface kept testers warmer than other closed cell pads while sleeping on snow in cold conditions. The Solar worked great as a supplemental pad in a two-pad system for high altitude climbing. The high insulation value of the Solar gave peace of mind in the event our testers inflatable pad deflated. The SOLite is the lighter weight version of the Solar. It is a half-centimeter thinner than the Solar, but still has an R-value of 2.8. We found the SOLite to be the perfect 3-season pad for backpackers and climbers who might need to sleep on snow but not in super cold conditions. When these pads are used in warmer conditions just face the reflective surface down, and it performs just like the original tried and true Ridge Rest.