Update from the OR Show

Here's are some pictures from our Director, Dunham Gooding, the Equipment Shop Manager Richard Riquelme, and Equipment Specialist Jeff Voigt, who are at the Outdoor Retailer Show, in Salt Lake City, Utah. 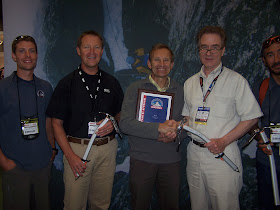 The Sum’tec had it’s place on nearly every ice, or glaciated route that our testers climbed. It’s design allows it to excel in a variety of alpine climbing applications, without making sacrifices to weight or performance.

Petzl Core Battery
The Core is hands down one of the best innovations in lighting technology that AAI testers have seen. With Petzl OS and a computer the user can determine their own brightness and burn time needs. Since the Core is rechargeable it keeps about 300 batteries out of
landfills. 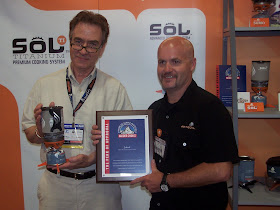 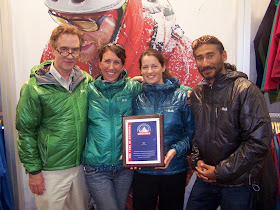 Xenon Jacket by Rab
Testers were impressed with how lightweight, warm and compact theXenon Jacket is. The Xenon is a great insulation piece for three-season use. The Xenon sheds snow well; the fit is great for climbing, and it weighs next-to-nothing. 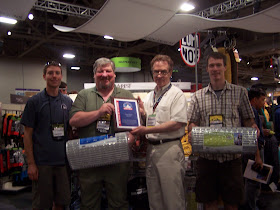 
Ridge Rest Solar, and SOLite Sleeping Pads by Cascade Designs
The Ridge Rest Solar and SOLite are improvements on the tired and true Ridge Rest sleeping pad. Using a reflective coating on one surface of the sleeping pad, heat is reflected towards the user for use in cold conditions or when sleeping on snow. The Solar is thicker and meant for 4-season use, while the SOLite is thinner and perfect for 3-season use. 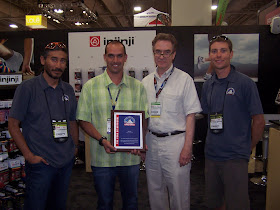 Outdoor Series Socks by Injinji
AAI guides have been testing Injinji’s Outdoor Series socks from the deserts of Red Rock, to the cold and icy slopes of Alaska. Since the socks have individual toes, it provides more insulation in colder conditions, and gives sweat a place to go in hot conditions. Skin on skin contact between toes is eliminated preventing blisters between toes.