In 1968, Yvon Chouinard, Doug Tompkins and a handful of other climbers from Southern California dropped everything, bought a van and drove to Patagonia to climb Fitzroy. This 5,000 mile journey into the heart of the South American mountains became a focal point of the climbers lives. They felt that the journey to get to the mountain was just as important as the mountain itself. Indeed, Chouinard, who started the Patagonia clothing company, sites this trip for his later involvement in conservation efforts throughout the world. And Tompkins also sites the trip as the inspiration that led him to eventually move down to Patagonia in order to help create national parks in Chile.

The newly released film, 180° South, doesn't really go into much depth about that initial trip to Patagonia. Instead, the film focuses on a much younger adventurer named Jeff Johnson. Johnson saw a film entitled, Mountain of Storms, about Chouinard and Tompkins 1968 trip. This short film inspired Johnson to make his own trek south in the search of adventure.

Johnson picked out an obscure Patagonian peak and some friends to join him on it. The friends included Chouinard and "the-funny-man-of-climbing" Timmy O'Neil, as well as pro surfer Keith Malloy. Along the way, he also befriends a young woman named Makohe whom also joins them on the climb.

To imitate Chouinard's and Tomkin's long ago journey, Johnson gets "hired" to help crew a 57-foot sailboat down to South America. While he didn't exactly imitate the 1968 van ride, he did imitate the adventure of the travel. Johnson experiences everything he could experience on a small boat during the journey from seasickness serious damage at sea.

When Johnson finally arrives in Patagonia, he and his crew bushwack in and try to climb Cerro Corcovado, a striking glaciated peak capped by an imposing rock tower overlooking the ocean. 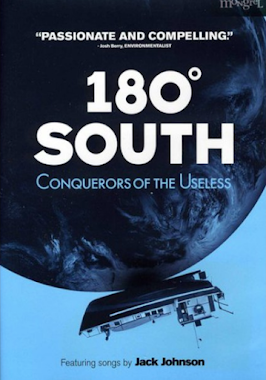 180° South is a beautifully crafted film. Stylistically it is quite similar to Banff Mountain Film Festival films like Take a Seat, the documentary about the tandem bicycle rider who road 20,000 miles from Alaska to South America, always looking for someone to join him on his bike. Or like Alone Across Australia, another Banff film about an adventurer who walks across Australia pulling a cart with his dog. These are the outdoor adventure films that strike home and 180° South can easily hold its head up among these other classic documentaries.
180° South is an absolutely phenomenal film. It encompasses all of the elements that make for a beautiful "mountain" (in the Banff sense) film. It explores conservation and culture through the lens of adventure sports and it gives us some insight.

One element that works some of the time, but doesn't work consistently thoughout the film is a thematic connection between the mountains and the sea. Much of the film is about a boat journey and surfing, but then the piece transitions into a mountain phase. Once in the mountains they do repeatedly callback the sea...but as the narrative shifted away from the sea, it would have made more sense to focus on that environment.

180° South was released on DVD, at a series of theaters and on streaming video almost simultaneously. And while this has happened with a handful of films over the last five years, it's not terribly clear why they did this with the documentary. For most viewers, it doesn't matter. The film is accessible immediately on Netflix via streaming video.

Yvon Chouinard is an icon in the outdoor and climbing world, and this film helps us to understand what has motivated him. It is the same thing that motivates each one of us each time we go outside.