A couple of years ago, Santa decided to make a dramatic entrance into the Gardens Mall in Palm Beach, Florida. But instead of flying in behind eight tiny reindeer, Santa decided to rappel in. But unfortunately, Santa isn't very good at rappelling...

Indeed, Santa's so bad at rappelling, that it's lucky that he's still in one piece.

"Why didn't Santa have an autoblock back-up on his rope or wrap the rope around his leg while he tried to work his beard out? You know, so he would have been safer and not gone splat?"

"Why didn't Santa have a couple of prussik cords or slings that he could have used to climb up the rope to release his beard?"

"Why didn't Santa just rappel on an extension? You know, like the guy in the next picture? This would have put the device up high enough that his beard would have been less likely to get stuck." 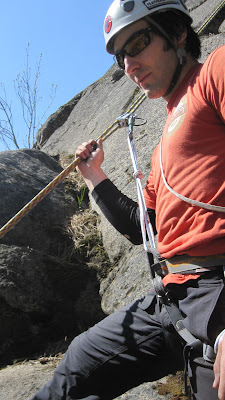 And lastly, "why was it again that Santa didn't just fly in with his sleigh?"

The kids might have some comments too, like, "Santa needs to take a class. Mrs. Claus should get him a course with AAI...you know, so that he's around to bring us gifts next year!" 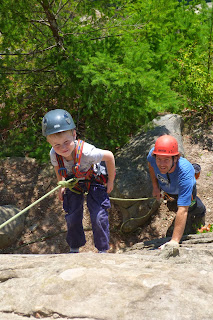 My kids were really smart when they were little. They' were so smart that they even found this cool write-up and description of exactly what Santa could have done...

Happy Holidays from all of us at the American Alpine Institute!