--A pair of climbers were rescued in Smith Rock this week after their rope got stuck on descent. To read more, click here. 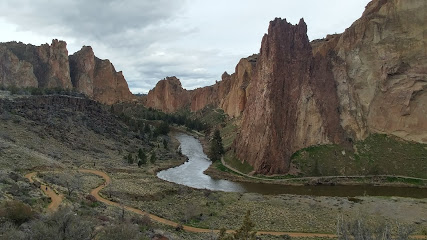 Smith Rock State Park
--The National Park's Traveler is reporting that, "A lawsuit filed Wednesday seeks to renew the grizzly recovery program for the North Cascades of Washington state, a program that was supported by former Interior Secretary Ryan Zinke but scuttled by his successor, David Bernhardt. The lawsuit, filed by the Center for Biological Diversity, maintains the Trump administration's abandonment of the program violates the Endangered Species Act and was based on politics, not a conservation-driven decision."To read more, click here.
--A number of COVID-19 cases have been attributed to a party in employee housing at the Big White Ski Resort in British Columbia. As of now, 76 cases have been attributed to the party. To read more, click here. Something similar also happened at a resort in Calgary.
Sierra:

--Fire restrictions in Sequoia and Kings Canyon National Park have been removed.

--The Reno Gazette Journal has published an editorial on Congress and it's blockage of a bill that would allow for military tests in sensitive desert areas: "The values of these landscapes are embedded in their very existence and the inherent benefits they provide — such as recreational access, land and water conservation, Tribal history and culture, and protection of wildlife. In the Congress-approved 2021 National Defense Authorization Act, both military sites received status quo time extensions for the next 25 years, which means they cannot expand their current footprints for bomb testing and other damaging activities that leave irreversible scars on these landscapes." To read more, click here.
Colorado and Utah:

--Snow Brains is reporting that, "Since Friday three Coloradans lost their lives in avalanche accidents and 132 avalanches were reported. One hundred and eight avalanches were triggered by people in the last week. More people die in avalanches in Colorado than any other state, and this year conditions are especially dangerous." To read more, click here. And here's some more info on two of the fatalities.
--If you work at Vail, Breckenridge, Beaver Creek or Keystone, your employee pass for weekend skiing or riding is no longer valid. The reason? Reservations for weekend visits are full. To read more, click here.
--Vail Resorts has asked the Summit County to remove resort skier number restrictions. To read more, click here.

--During the Trump Administration, there was a significant "brain drain" in the Bureau of Land Management. Many career employees left their positions, leaving the next administration and the future of these lands in dire need of administrative repair. To read about this, click here.
--Snowbrains is reporting on an increase in vandalism in national parks since the pandemic began: Since coronavirus started back in March 2020, multiple other national parks and recreation areas have reported similar issues. In April, Delaware Water Gap National Recreation Area in Pennsylvania cited an over 600% increase in vandalism and illegal dumping, with 13 cases reported in April 2020 compared to only two the year before. Also, in April, the City of Rocks National Reserve in Idaho reported multiple graffiti incidents on prehistoric pictographs and signatures. In September this year, graffiti along five miles of trail and illegal fires were reported in Acadia National Park. These examples are most likely the tip of the iceberg when it comes to incidents like these." To read more, click here.
--Outside and many others are reporting that, "president-elect Joe Biden has chosen Representative Deb Haaland, a first-term congressperson from New Mexico, to be his secretary of the interior. If confirmed by the Senate, Haaland will be the first Native American to run the Department of the Interior and the first to serve on a presidential cabinet. She’ll oversee agencies like the Bureau of Land Management and National Park Service, in addition to the Bureau of Indian Affairs." To read more, click here. 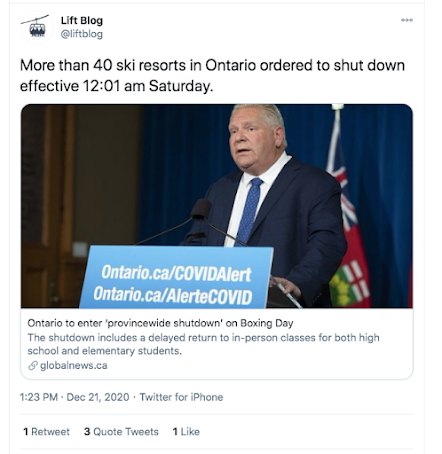 --The Tahoe Daily Tribune is reporting that, "The Human-Powered Travel in Wilderness Areas Act, introduced by Sen. Mike Lee (R-Utah), seeks to remove the blanket ban of bicycles in wilderness areas by inserting language to ensure that the rules restricting 'mechanical transport' does not include forms of non-motorized, human-propelled travel." It's important to note that this may be an attempt to chip away at the landmark Wilderness Act. To read the article, click here.
--This shouldn't be news to anyone, but ski towns are suffering in the pandemic...
--Several resorts are punishing people who don't show up for their reserved parking spot. Check it out, here. 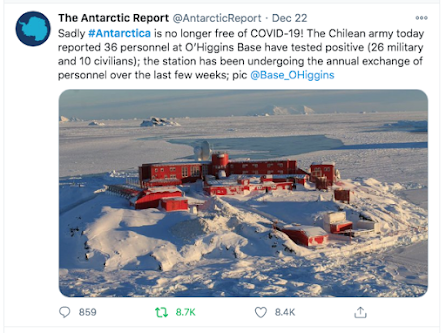 --WVPB Public Broadcasting is reporting that, "The new federal stimulus relief package includes pandemic-related aid, as well as other end of year business, including a new national park designation for southern West Virginia. The New River Gorge will be redesignated from a National River to a National Park and Preserve, making it the 63rd national park in the country and 20th preserve. It was announced in a press call Monday with West Virginia’s U.S. Sen. Shelley Capito." To read more, click here.
--Climbing is reporting that, "alpinists Benjamin Lieber, Alex Hansen, and Austin Schmitz put up two new big routes this Autumn season in the Hayes Range in Alaska. The first was DeWild Style (AI4+) on the SE Face of Peak 9,250 that Lieber and Hansen climbed. After that success, they recruited their friend Schmitz for his first trip to Alaska. Together the three established Longing for Light (AI5) on the NE Shoulder of Mount Moffit." To read more, click here.
Jason Martin at 6:00 AM