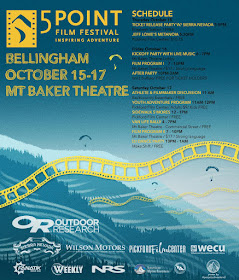 --The 5-Point Film Festival will be having a major festival in Bellingham, Washington from October 15-17. There will be a number of events including a Trivia Night hosted by AAI at Elizabeth Station on October 15, as well as a festival honoring the dirtbag vehicle living lifestyle. And there will be lots and lots of movies. To read more, click here.

--The fourth principal of Leave No Trace is to Leave What You Find. This means to leave cultural artifacts in place, as they lose their value once they are removed from their context. Johnathan Bourne probably should have taken an LNT class before transporting a bunch of native artifacts across state lines. To read more, click here.

--A 50-year-old Utah man died in a canyoneering accident in Zion National Park on Friday. The man, identified by park officials as Christian Louis Johnson, was found dead about 7:20 p.m. by a search and rescue team in Not Imlay Canyon, a park release said Saturday. To read more, click here.

--Sigh... Do people really think that desert potholes filled with water are wishing wells? Apparently they do in Arches National Park. People are dumb. To read more, click here.

--Officials with the Santa Fe National Forest have offered a $5,000 reward for information leading to the arrest of whoever cut down hundreds of trees to create what are believed to be illegal ski runs. To read more, click here.

--Here are some additional details about the Joshua Tree Climb Smart Festival, running from October 16-18.

--Five Four Corners-area tribes have united to propose a 1.9 million–acre Bears Ears National Monument that would be the first truly collaborative land management effort between Native Americans and the federal government. To read more, click here.

--A 41-year-old climber died on Christiana Peak after falling 200 feet Monday afternoon when a piece of rock he was using as a hold flaked off, according to the Pitkin County Sheriff’s Office. The body of Travis Boyle of Union, Kentucky, was taken out of the backcountry west of Capitol Peak by 3:20 p.m. Tuesday, according to a Sheriff’s Office statement. To read more, click here.


--The Colorado Supreme Court on Tuesday heard oral arguments in a wrongful-death case that could shake the foundation of the law that shields ski areas from liability for on-slope injuries and deaths. Lawyers were grilled by the justices weighing this question: Are avalanches an inherent risk of skiing, or should resorts be liable for injuries caused by sliding snow within their boundaries? It depends, they said, on how you interpret dangers listed in the Colorado Ski Safety Act — which doesn't specifically name avalanches but does include the conditions that create them. To read more, click here.

--The Denver Post wrote an editorial concerning the case in the preceding news item. They argue that avalanches inside a ski resort are NOT an inherent risk of skiing. We agree with this. One of the many reasons to ski inside a resort is because avalanche danger is supposed to have been mitigated. To read more, click here.

--Late last week, the most successful land conservation program in U.S. history expired. Despite bipartisan support for the program in both the Senate and House of Representatives, congressional leaders have neglected to include the program in recent budget negotiations and are letting it die. To read more, click here. 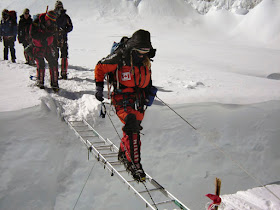 A climber walks across a ladder in the Khumbu Icefall.
Photo by Guy Cotter

--This year, 2015, will be the first in 41 years that no human has stood on the summit of Mount Everest. To read more, click here.

--There has been a lot of debate this week about the term and designation, "first female ascent." To read about it, click here.

--A university in Louisiana lost a lawsuit concerning a campus climbing wall accident due to the fact that the state doesn't allow liability waivers. To read more, click here.

--Following the announcement that there is water on Mars, there was an article about how they can study it. Climbers will be needed! And considering there are some walls on the red planet that are nearly 18,000-feet tall, I'm sure there won't be any deficit in climber/scientist/explorers who will one day want to participate in a manned mission to Mars. To read more, click here.

--They also witnessed an avalanche on Mars from space. Check it out.

--And finally... A woman thanks a black bear for not messing with her kayak. She then subsequently uses bear spray on the animal and it seems to immediately know the best way to get revenge...by eating the kayak. Check out the video below:

--And of course, every viral video needs a parody. The following is a lot of fun: