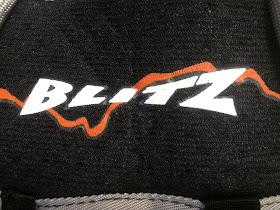 The Camp Blitz Harness is designed as a versatile, lightweight all-mountain harness. The padding is light (but there) and you can remove the harness by undoing a series of buckles and clips and without needing to slip your legs through--which means you can whip off your harness while leaving your crampons or skis on.

While I love the principle behind this harness, it loses major points on comfort for the way the gear loops are designed. The gear loops are loose and floppy and, crucially, they are attached to the upper part of the waist belt rather than the lower part. This means that when you clip things to the loops, they tend to drag the upper part of the waist belt down and twist it. I've generally found this to be uncomfortable, but it was particularly bothersome on a Denali trip this year when I was dealing with a harness loaded with a lot of gear and then a 60-plus-pound pack on top of that. The waist belt twists all around and can end up riding up against your clothes and then directly against your skin. This is an issue that could easily be fixed by adding more structure to the waist belt and gear loops or moving the gear loops down lower on the waist so that it doesn't twist it.

Pluses for the harness are that it's light (just 7.7 ounces) and easy to take on and off. The belay loop floats freely rather than being permanently locked in to the waist belt, and unlike some other lightweight harnesses (like the Petzl Hirundos, for example) there are clips for the leg loops that you can undo rather than having permanently sewn loops. There's also a loop for hub racking carabiners, which makes it easy to carry ice screws. The fact that this harness has some padding on it (as opposed to the Black Diamond Couloir) makes this harness suitable for alpine rock climbing and ice climbing rather than just pure glacier walking. You wouldn't want to spend the whole day in a hanging belay in it, but you can put your weight in the harness without feeling like you're slowing cutting off circulation to your legs.

Camp has long been on the cutting-edge of lightweight climbing gear, and the first iteration of this harness has promise. But the gear loop issue is a major one, and while I want to love this harness, instead I think I'll just replace it.