Climbing and Outdoor News from Here and Abroad - 5/3/18

--A couple were stranded in Red Rock Canyon overnight this week. It's not clear why. To read more, click here.

--The Alaska season is underway. A team just completed a hard first ascent in the Revelation Range. To read more, click here. 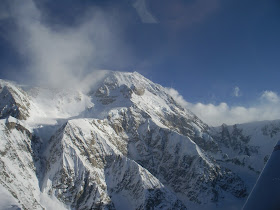 --The NPS is requiring people to carry a lot more of their waste off Denali now. Check it out.

--The New York Times has a nice piece on that "other" Penn State scandal: "Nature is unscripted and hard to predict. Having recently discovered this reality, Penn State has decided that its 98-year-old, student-led Outing Club shall no longer be allowed to go on outings. Citing the high risk of remote environments and poor cellphone service, the university is recommending that the club restrict its offerings to films and speakers. Students are being funneled into engaging only in previously vetted human constructions. The students of the Outing Club are fighting back — and good for them. Driven to explore both nature and risk, they are well on their way to adulthood, which means knowing how to resist injunctions that are more protection against future lawsuits than they are in service of the students themselves." To read more, click here.

--Vista Outdoors was the centerpiece of a boycott this year when many companies, including MEC and REI dropped them because of the fact that they own a company that makes assault style weapons. They also own CamelBak and Giro. Vista has decided to sell off Savage Arms, the controversial part of the company. But they say it has nothing to do with the boycott... To read more, click here.

--Want to race from Portland, Oregon to Hudson Bay in Canada, with nothing more than paper maps and compasses? There's a reality show looking for people to do that. Check it out.

--There have been several high profile incidents over the last couple years in the Himalaya. In many of these cases families and friends of the missing people used the internet to crowdfund for rescue. Is that a sustainable model for rescue insurance? Probably not...

--Ryan Zinke. The dude doesn't know how to wear an NPS ranger hat...and people are not happy about it.

--Speaking of Ryan Zinke and the NPS. It looks like the Secretary of the Interior is shuffling people around in the Park Service. The idea is that if you make them move, they might quit. It appears that those who don't agree with Zinke on climate change and public lands policy are being shuffled the most. To read more, click here.

--Interested in outdoor writing? A writing competition might be a great way to start. Learn more, here.

--It looks like 3D printing is coming to your local rock gym. Imagine taking pictures of the route you're working and then replicating it indoors. Check it out.

--35.8 billion dollars has been added to the economy due to National Park visitation. To read more, click here.
Jason Martin at 6:00 AM