Climbing and Outdoor News from Here and Abroad -

--Gripped is reporting that, "Chilliwack Search and Rescue members rescued two climbers from Mount Slesse on Monday afternoon. The climbers were on or near the classic Northeast Buttress when one of the climbers took a fall." To read more, click here. 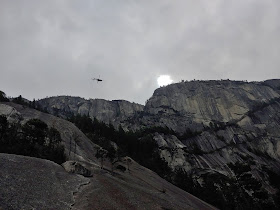 A helicopter preps for a short-haul in Squamish last week.

--There was an accident on Monday in Squamish. Here's a snippet from the Squamish Climber's Facebook Group:

The incident today was a group of three experienced climbers on milk road.
The leader took approximately a 3m fall and caught his foot on a ledge, injuring his ankle. All members of the party were highly trained in first aid and self rescue, so while activating SAR they were also able to assess and stabilize the injury and being to self rescue themselves.
SAR made contact with them via phone while they were in the process of lowering themselves to the ground; and was able to coordinate to meet them at the base of the Climb to assist with a stretcher carry back to the parking lot.
Approximately 20 member from SAR, BCAS, and Squamish fire worked together to carry the patient back to the ambulance.
Today was an excellent example of an experienced and skilled group having some bad luck and working to help themselves while at the same time reaching out for assistance.
Thank you to everyone involved.

--This is a depressing article about how scientists are chronicling the disappearance of the Columbia Glacier near Monte Cristo. The Columbia is the lowest glacier in the Cascades and sits between 4,700 and 5,600-feet.

--Alpinist is reporting that, "The Scottish alpinist Simon Richardson and Canadian alpinist Ian Welsted recently made what is likely the first complete ascent of the West Ridge of Mt. Waddington in the Coast Mountains of British Columbia, and possibly the first traverse of the mountain (from Fury Gap to Rainy Knob) as well." To read more, click here.

--Here are a couple of fire updates for the Eastern Sierra.

--The Denver Post is reporting that, "Possible skeletal remains found during a search for a 55-year-old man in Eagle County could be those of a missing Chinese tourist, authorities said. Search and rescue team members began efforts to locate 55-year-old Yunlong Chen who was reported missing March 7, according to the town of Vail. Chen was last seen Feb. 28 in the area of the Vail Transportation Center during a ski trip and was supposed to fly back to China but did not arrive." To read more, click here.

--The Daily Camera is reporting that, "A man in his 20s was rescued Wednesday after falling 20 feet in Eldorado Canyon State Park in Boulder County. At 3:25 p.m. the Boulder County Sheriff’s Office received a 911 call that a climber had fallen in the Yellow Spur route in an area called the Red Garden Wall. The climber suffered serious, but non-life threatening injuries as a result of the fall, according to a news release from the sheriff’s office." To read more, click here.

--The Aspen Times is reporting that, "With the popularity of the Ikon Pass that was launched last year, Aspen Skiing Co. will make adjustments to deal with the masses this upcoming season. In an annual update to Aspen City Council on Monday, Mike Kaplan, Skico’s president and CEO, spoke about specifics of last season’s surge of Ikon Pass holders at Aspen-Snowmass resorts." To read more, click here.

--The Jackson Hole News and Guide is reporting that, "The body of a man who died in a climbing accident in the Wind River Mountains has been recovered. Zijah Kurtovic, 63, of Evanston, Ill., died at about 12:30 p.m. Aug. 10 of 'massive blunt-force trauma from a fall from extreme height,' Fremont County Coroner Mark Stratmoen said Friday." To read more, click here.

--NBC News is reporting on a wolf attack in Banff. "A New Jersey woman said her family's camping trip in Canada turned into a scene "out of a horror movie" when a wolf ripped apart their tent as they slept and tried to drag her husband away — before a man at a nearby campsite heard their screams for help and came to their rescue." To read more, click here. 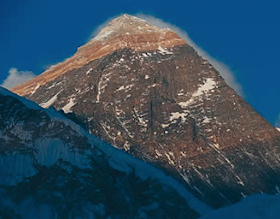 --Rock and Ice is reporting that, "On August 14, Nepali officials proposed a new, stricter set of guidelines for mountaineers seeking permits to climb Mount Everest. The proposal comes in the wake of an unusually deadly season on the mountain. Media coverage has drawn public attention to overcrowding at the summit, as well as to the large amounts of trash that have gathered on the slope and to the continued presence of the bodies of deceased climbers." To read more, click here.

--NBC News is reporting that, "Brooke Raboutou, 18, became the first American to qualify for the Tokyo Olympics in sport climbing by reaching Tuesday’s combined final at the world championships in Hachioji, Japan, USA Climbing confirmed." To read more, click here.
Jason Martin at 6:00 AM