Falling on Lead and "Cratering"

It was a beautiful spring day in Red Rock Canyon. I was overseeing the second day of an American Mountain Guides Association Single Pitch Instructor exam and all of the guide candidates were doing a great job. It was a great day to be in the mountains.

It was a great day until we saw a "runner."

People who are running to get help for an injured climber are often referred to as runners. In this particular instance it was a young woman running down the canyon. She yelled for help and told us she was trying to get a better cell signal...she kept losing 911.

Two SPI Candidates, Kevin and Brenden, and I grabbed our first aid kits and made our way up canyon. Kevin was a firefighter and Brenden was a nursing student. They were excellent people to have with me on a rescue.

When we finally discovered the injured climber, we found a man in his late fifties. His head was seriously lacerated and he had been knocked unconscious for two to three minutes before coming back. There was blood in his helmet and it appeared that the the tab on the back had perpetrated the laceration. The rear of helmet was also cracked. It looked like it had been pushed up under his scalp and then pulled back out as the helmet contracted around his skull.

The man's two college-aged daughters were both there as well. All of them, the man and his grown children, seemed to be rank beginners. A tote bag that was used to carry their gear sat next to the rocks.

We immediately held the man's head to keep him from moving it, providing C-spine. Clearly the fall could have caused a spinal injury and we didn't want to take any chances whatsoever. Kevin cleverly created a spinal collar out of coiled up rope and wrote the time of the accident on a piece of medical tape holding the rope in place. 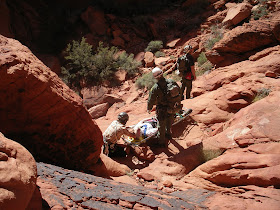 The Patient Getting Ready to be Short-Hauled

Not long after we finished with the C-collar, a helicopter arrived. The Las Vegas Search and Rescue team is one of the best in the world. They packaged the man on a litter and were quickly able to extract him in the tight canyon. We assume that he safely made it to the hospital and is now back to his normal every day life...

Rescues can be extremely interesting to watch. There are helicopters, medical people, cool hauling systems, and often some blood. But they aren't that cool if you're the one that is getting rescued...so why did this individual need to be rescued...? 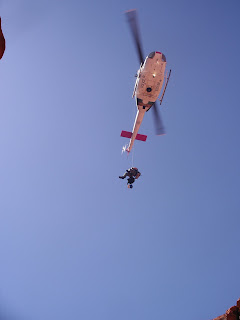 A Search and Rescue Office being hauled back to the Helicopter

Obviously we weren't there, but there were clues. The group was climbing at the Cut Your Teeth Crag in Calico Basin. This is a beginner crag, but it is also a very young crag. It was developed in 2006 by Mike McGlynn and Todd Lane. The route that the party was on is a bolted 5.7 called Introproximal Stripper. The importance of knowing the age of the crag is that on sandstone, holds can sometimes crumble or even break on newer routes...

The lead rope ran through draws on the first two bolts. The girls claimed that their dad was trying to clip the third bolt when he fell. The dad was tall, at least six-feet four inches tall, and probably weighed around 200 lbs. The girls were both small and probably didn't weigh more than 120 lbs each.

So looking at the situation, there are a lot of possible factors. Following are some speculations based on the story that the girls told.

Rope behind the Leg:

It's unfortunately quite common for climbers to lead with a rope running behind their leg.  If this is not something that you are constantly paying attention to, it is an element that could easily cause you to fall, catch your leg and flip upside down.

Both of the man's daughters claimed that he flipped upside down in the fall.  This could have been from the rope running behind his leg and it could have been from his feet hitting something and flipping him.  However, since he had no obvious injuries to his feet, heels or ankles, it seems more likely that he was flipped by the rope.

Over the Head Clipping:

It's very dangerous to clip over your head. This is because when you pull slack to clip the rope, you are also putting a lot of extra slack into the system. If you are close to the ground and take a fall at this time, it is likely that you will "crater."

Some people put the slack rope in their mouth when they are getting ready to clip. It is not uncommon for those who take leader falls in such a situation to have teeth pulled out by the rope. While this didn't happen in this case, it is definitely something to be worried about.

The safest way to clip a rope is to wait. Wait until the draw is at your waist to clip it. That way, you will take the smallest possible fall. Unfortunately, this can feel very unstable. It's always more satisfactory to have the rope clipped than not to. And indeed, many routes are designed to clip the rope above the head...but we should be very aware of the dangers implicit in the action.

It is quite possible that the individual in this accident was trying to clip over his head when he fell.

The Cut Your Teeth Crag is a short crag and the weight differences between the two individuals was large. It's likely that the young woman who was belaying was pulled significantly off the ground as her dad landed. I did not confirm this at the time, but I did ask if she was tied down.

Slack in the Belay

Lastly, it's possible that the lead belay had additional slack. Sometimes belayers allow the lead line to sit on the ground in front of them. The line going from the device to the wall should have a mild smile to it. It should not hang down on the ground.

As we were not there, we don't know what the belay looked like and this may not have been an issue. But clearly one or more of the factors described contributed to the accident.

The best way to avoid an accident is to avoid climbing all together. But for most of us, that isn't a possibility. So instead of avoiding the sport we love, we have to constantly study how accidents take place and learn from them.

Every year the American Alpine Club produces a book of accident analysis entitled, Accidents in North American Mountaineering. It is a grim read, but it also provides us with many many opportunities to see what not to do.