I was in Red Rock Canyon, just below the first bolt, when my foot smeared off. My stance was somewhat sideways and if I didn't have a rope on, I would have fallen eight feet directly on my side, likely breaking my arm...

But how could I have a rope prior to the first bolt?

Easy. I stick clipped it. And that stick clip saved me from a hospital visit.

Stick clips are an important part of sport climbing. These are specially designed poles that may be used to clip the first bolt with a rope prior to climbing the route. These devices may be purchased from many different climbing companies, they may be made out of homemade supplies or they may be "McGyvered."

The concept behind a stick clip is simple. You have a pole that allows you to clip the first draw to the first bolt with the rope prerigged through the bottom carabiner on the draw. Then you may be toproped through the starting moves of the climb.

There are several manufactured stick clips available on the market. Following are a couple of examples: 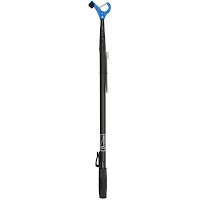 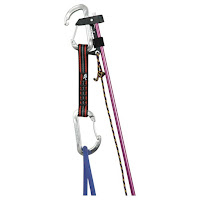 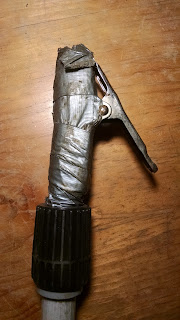 My stick clip wasn't designed with a means to keep the carabiner open. Instead, I just push the carabiner against the bolt until it clips.

There are going to be occasions when you don't have access to a stick clip. On these occasions, you may wish to McGyver something. Climbing magazine put together and excellent video on this topic with the now Executive Editor of the magazine, Julie Ellison, describing how to do this:

I used to be a little wary about carrying stick clips. A lot of my friends made fun of me for carrying it around. But the fact that I didn't hurt myself in that short fall before the first bolt made up for every last joke made by my trad climber buddies...