Climbing and Outdoor News from Here and Abroad - 7/8/21

--An earlier notice stated that Washington Pass was to be closed on July 15. That work has been cancelled due to fire danger.
--From the office of the Governor: "Gov. Jay Inslee today declared a statewide state of emergency relating to the growing risk of wildfires, including a statewide prohibition on most outdoor and agricultural burning through September 30, 2021." To read more, click here.
--The bridge at the start of the Ridley Creek Trailhead (an alternate approach to the south side of Mt. Baker) is out.
Sierra:

--From Sequoia and Kings Canyon National Park: "Due to extreme fire danger, record setting temperatures, drought, and commitment of firefighting resources both regionally and nationally, the parks are increasing fire restrictions to Stage 3 – their highest level. Effective at 12:00 p.m. on July 1, 2021, Sequoia and Kings Canyon National Parks are enacting a parks-wide campfire and smoking ban. This includes all campgrounds, picnic and day-use areas, and wilderness locations inside the parks. There are no exceptions to this change."
Desert Southwest:

--The New York Times is reporting that, "A California couple who mowed down 36 protected Joshua trees to clear their land for a new house have been fined $18,000, a punishment the authorities hope will discourage others from uprooting the iconic desert plants." To read more, click here.
--From SnowBrains: "Death Valley National Park, CA, had its hottest June on record this year, with an average day/night temperature of 102.9°F. June 2021 beat the previous record by 1.1°F. The normal average June temperature is 95.0°F, for records extending back to 1912. Every June for the past decade has exceeded this average." To read more, click here.
Colorado and Utah:

--Ouray News is reporting that, "rescue crews on Saturday recovered the body of a man who died after falling while descending Mount Sneffels. The man was climbing by himself, had summited the 14,158-foot peak early Friday afternoon — he signed his name in the summit record — and was descending the southwest ridge when he fell roughly 1,000 feet, according to Ouray Mountain Rescue Capt. Ruth Stewart." To read more, click here.
--A climber died near Colorado Springs at Cheyenne Cañon over the weekend. It's unclear what led to the incident. To read more, click here.
--A technical rescue was performed on a female climber who had an accident in Utah's Echo Canyon. Information is sparse. To read about it, click here. 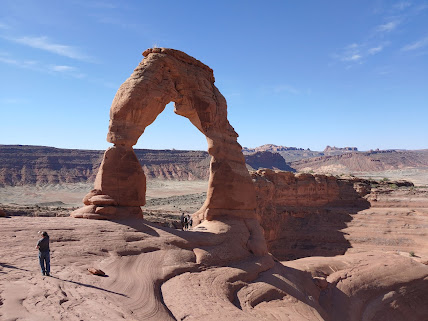 The Delicate Arch in Arches National Park
--Arches National Park is turning people away due to crowding. We experienced this in the Spring, but found it to be easy to deal with by getting up earlier the next day. Read about it, here.
Notes from All Over:
--The Hill is reporting that, "a grizzly bear killed a camper in Montana early Tuesday morning, according to a state wildlife agency spokesperson. Montana Fish Wildlife and Parks spokesperson Greg Lemon said the incident occurred between 4 and 5 a.m. near Ovanda, adding that a team will attempt to track down the bear." To read more, click here.
--Footwear News is reporting that, "REI Co-op is making a quarter million dollar investment to support all-women fire crews who look after the country’s national parks. The leading outdoor retailer announced an investment of more than $250,000 in the National Park Foundation, which will be made this year. REI stated it will fund women’s fire corps crews as part of a larger effort to promote diversity, equity and inclusion within the charitable organization’s wildland fire program. Also, it is part of the retailer’s ongoing fight to combat the effects of climate change." To read more, click here.
--The Hill is reporting that, "The Biden administration announced on Wednesday that it will raise pay for federal firefighters to at least $15 per hour as part of a broader strategy to respond to wildfires. A senior administration official told reporters on Tuesday that the raise will come through bonuses in 2021 so that the pay for firefighters rises to the equivalent of $15 per hour." To read more, click here.
--The Outside Business Journal is reporting that, "The North Face on Friday announced it will discontinue the logo the brand had used for its FutureLight apparel technology after an artist named Futura filed a trademark infringement lawsuit against the company earlier this year. Futura, whose name is Leonard McGurr, posted a statement about the matter to Instagram on June 21, outlining his legal claim against The North Face and how the brand reacted in its legal response." To read more, click here.
--A team just completed the first adaptive ski descent of Denali. Check it out!
Jason Martin at 6:00 AM