Lightning Hazard in the Mountains

I remember it like yesterday. I was in Bolivia, on the top of a mountain. My helmet was buzzing and sparks were jumping off my ice screws.

We survived the storm. We were not hit by lightning. But it felt like it was very touch and go there for a bit. And honestly, I didn't know that much about lightning in the mountains. That storm really focused me. And ever since, I've been extremely aware of the potential.

While there are some ranges -- like the Wind Rivers or the Colorado Rockies -- where lightning is common. It's far less so in many other ranges. But that doesn't mean that it doesn't happen. A lightning storm can happen anywhere, and a strong knowledge of what to do could literally save your life.

The following video covers a number of lighting considerations. The lighting aspect of the video ends at about 5:30. The remainder of the video discusses other high elevation hiking issues and may be worth the watch for many.
Here are some takeaways:
In the video, lightning position is described as crouching down, holding your hands over your ears and picking up your heels. An additional consideration is the use of a pad or backpack beneath your feet.
It may not be possible to hold the position for long, so you may have to sit down. 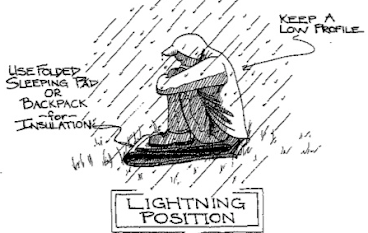 Many ask, does the lightning position work...?
The answer is that it's better than nothing. One video produced by Backpacker magazine notes that this is an absolute last resort. Indeed, there are a handful of articles stating that it doesn't work. By that, they mean that it won't keep lightning away, but will decrease the impact if you are hit.
The best way to stay safe in a lightning storm is to avoid it totally. As stated in the video, keep your eyes open and get to lower terrain if it seems like a storm is on its way...
--Jason D. Martin
Jason Martin at 6:00 AM